Classic Rewind: Only Angels Have Wings (1939) 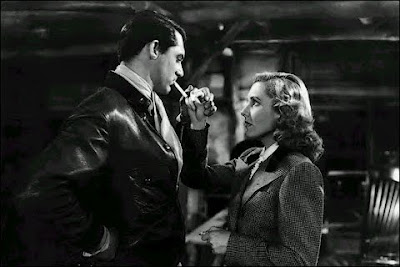 If there is one consistently admirable quality in the works of Howard Hawks, it is the director's careful, studied approach to professional male relationships, which he accomplishes through marvelous performances and astute, reverential writing.

In Only Angels Have Wings ('39), the hazardous, all-too fragile lives of small-band mail pilots stationed in Barranca (and the beautiful women who battle for their attention) serve as the subjects in this masterful and criminally overlooked aviation pic.

Cary Grant plays Geoff Carter, a tough, hard-nosed, impenetrable pilot who is seemingly desensitized to the sight of death from above (as seen in the opening few minutes). Not nearly as strong-willed is the fresh-off-the-boat blonde, Bonnie Lee (Jean Arthur), who reacts to Geoff's insensitivity as if he committed the act himself.

What the film boils down to is the inability of Geoff to become attached to anyone but the airways. Bonnie loves Geoff, but his perilous career and flippant detachment leaves her confounded and angry. Geoff isn't really sure what he wants, all he knows is what to do in the air and how to run his pilots.

Only Angels Have Wings is essentially a far more sophisticated, edgier and eloquent version of Victor Fleming's Test Pilot ('38), which had Myrna Loy competing with the skies for the affections of the reckless daredevil played by Clark Gable, who is concurrently wrestling with the brotherly advice longtime friend and colleague played by Spencer Tracy.

In the Tracy role here is Thomas Mitchell, a superb character actor who owned the year 1939, appearing in such films as Gone With the Wind, Mr. Smith Goes to Washington, The Hunchback of Notre Dame and Stagecoach (for which he took home a Best Supporting Actor Oscar). Playing The Kid, Mitchell is a sloppy, experienced pilot going on 22 years who is found out by Geoff to be severely handicapped - his eyes failing him during a visual test that he can't cheat - relegating him to a future-less onlooker and a full-time drunkard.

Although most audiences probably found themselves caught in the romantic subplot between Bonnie (Arthur) and Geoff (Grant), or perhaps in an old flame played by Rita Hayworth, the real intrigue is the sagacious, brotherly love between these desperate pilots working on borrowed time - just don't bother telling them, they already know it. [A]
Posted by Chase Kahn at 7:58 PM