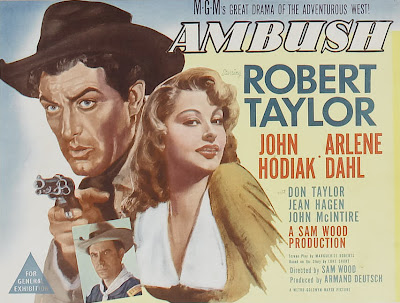 This cavalry western, the last film made by notable golden age director Sam Wood, is an under-appreciated gem. It's a superbly-directed ensemble drama about a scruffy, impenetrable scout (Robert Taylor) working for a cavalry division that must head off into Apache Territory to rescue the sister of the Major's significant other (Arlene Dahl) who is being held captive.

Although the synopsis sounds like a Searchers-like expedition, the majority of the film takes place inside the fort, where Ambush ultimately reveals itself as a character-driven melodrama in which several romantic subplots are deftly juggled (including Jean Hagen as a victim to domestic violence), giving these characters a distinctive weight before the rousing, climactic battle scene ensues under the Arizona moonlight.

Extraordinarily, the film begins with the traditional MGM logo under a bed of driving Apache drum which give way to a wonderful shot tracking the bodies and wreckage of an apparently ill-fated convoy. The camera then tilts up to the sight of the culprits, a sizable band of Apache warriors riding off into the distance as the film's title emerges from the pack and flies towards the screen.

The film's star, Robert Taylor, was at the time starring in just the second western of his career - the first being David Miller's Billy the Kid ('41). Known almost exclusively as a pretty, romantic counterpart for the ladies of the screen and the audience to ogle at, Ambush marks (for me anyway) his first breakthrough role into the realm of the gritty, self-interested individual a Ward Kinsman.

With his arched, determined brows and unanimated delivery, he's a convincing vessel for the nomadic self-preservation of the open plains. But when persuaded by the charms and looks of the Major's glamorous prize (Dahl), we can feel and believe the conflict of his ideals.

"People only die when they have something to live for," a Lieutenant reassures Kinsman before heading out, "I know, that's why I'm a little worried," he answers. And so the richness of a film like Ambush lies not in its anticipated U.S.-Apache chess match , but in its quieter moments, where the real conflict proves to be much closer to home. [A-]

Yes, I've started applying grades to classic films - why not?
Posted by Chase Kahn at 8:18 PM