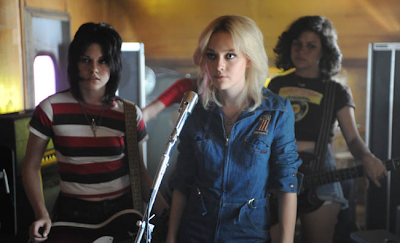 Floria Sigismondi's The Runaways is an adequate, agreeable and spunky rock biopic that's too innocuously patterned and constructed, yet it gets by on its central performances and penned-up girl power pugnacity.

Kristen Stewart, playing the more enduring and recognizable Runaway's guitarist Joan Jett has top-billing, but the film is ultimately about lead singer Cherie Curry (Dakota Fanning) and her premature rise to (and fall from) stardom, conflicted by the relationship with her family including her twin sister Marie (Riley Keough).

And Fanning, whose name still carries with it the sound of a child actor, delivers a personal and credible performance as a girl who uses her fascination with David Bowie to escape her marginalized family before ultimately reverting back to the person we see at the beginning of the film, waiting for Daddy to come home.

But even with his comparatively quaint screen-time and allowing the girls to shred the guitars and shriek the vocals, it's the manic, theatrical explictiness of Michael Shannon's crude record producer Kim Fowley that makes the most noise. Even during the obligatory construction-of-a-song scene (in which the Runaway's hit single "Cherry Bomb" comes to life in a rusty backwoods trailer) the conviction of the performers makes us forget that we've seen it all before. [B]
Posted by Chase Kahn at 5:23 PM