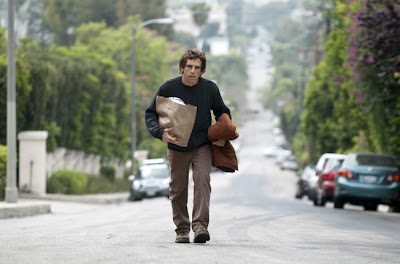 Noah Baumbach's first film since the abysmally invidious Margot at the Wedding ('07) means more 30-something neurotics on the brink of (or on the rebound from) mental and physical breakdown, reuniting with their past to dissect a life gone astray.

For me, Greenberg represents a return to form of sorts for the edgy writer-director (who emerged on a lot of people's radars after 2005's The Squid and the Whale), while for others, the film may be considered too tame and too prim in comparison.

Baumbach fans will probably feel underwhelmed by the admittedly unsubstantial plotting and surprisingly docile approach, but this is a keenly-observed character drama that has enough dry, awkward moments of wit and insight to see it through.

Ben Stiller plays the titular character Roger Greenberg, off to relax in his brother's almost mockingly adequate LA home after a brief stint in a mental hospital. "I'm just really trying to do nothing," he makes sure to tell people (most of them his old bandmates and disinterested ex-girlfriends). They squawk through their false, dishonest smiles, while one (Florence, the "personal assistant" to Roger's brother, played very well by Greta Gerwig) somehow sees something vulnerable and apologetic about Greenberg's itchy, scornful temperament.

As Greenberg tries to face and somehow rebuild his past friendships and relationships (old LA dwellers played by Rhys Ifans, Mark Duplass and Jennifer Jason Leigh) the further evident it becomes that this is a life best buried in the past, along with those cheesy album covers of his own band, now dispersed.

And Stiller, normally an effective comedian of the broad Tropic Thunder variety, is shockingly qualified to play this mentally off-kilter and contemptuous being. From the first moment, we believe in this character, his odd features and scruffy hair now an emblem of alienation instead of stuttering amusement. In the end, Baumbach isn't so much asking us to sympathize with this guy, but rather to identify him as one of our own. [B]
Posted by Chase Kahn at 7:33 AM