Blu-ray.com is reporting (via Spanish site Planeta HD) that Alfred Hitchcock's Dial M for Murder (1953) will be coming to Blu-ray sometime this year. I wish I could get excited about this, but alas, I'm not. 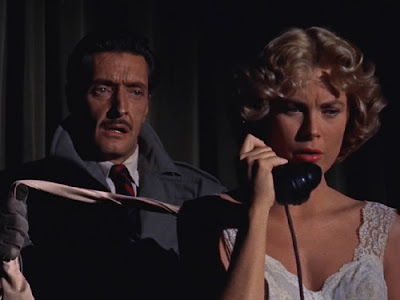 I've never been a fan of Dial M for Murder, the Grace Kelly, Ray Milland foiled-murder mystery. It's too stagey and claustrophobic and detail-oriented, like one giant, long scene out of an Agatha Christie novel.

I'm all for Hitchcock movies on Blu-ray, and I understand that Warner Bros. only has the rights to 8-9, but how can these other studios sit back when they have To Catch a Thief, Vertigo, The Birds, Psycho, The Man Who Knew Too Much - most of which were shot in VistaVision or Cinemascope with that bold, widescreen Robert Burks allure? If I'm ranking Hitchock films, Dial M for Murder doesn't even register in the Top 15.
Posted by Chase Kahn at 5:04 PM