After losing his father in October of 2000 and then his mother two years later, Burton decided to tackle this deathbed father-son drama after Steven Spielberg dropped the project to work on Catch Me If You Can (2002). With a more personal, fantastical film full of tall-tales and gothic legends after the critical failure of the large-scale, studio-driven Planet of the Apes (2001), all signs would seem to point to Big Fish being a welcome return to form. 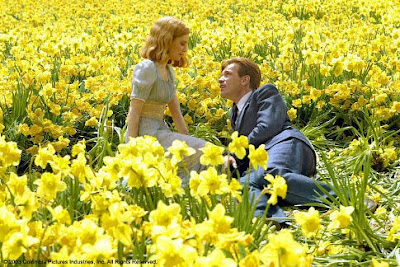 And here, while it's evident that Burton is tapping into his innermost feelings the way that he did with Edward Scissorhands, the result is something that feels strangely superficial and orderly. Although supposedly coming from the director's most private of places, Big Fish feels more impersonal and foreign than anything that Burton has ever done, with the exception of the aforementioned Planet of the Apes. Viewing it with the filmmaker in mind is like watching David Fincher's The Curious Case of Benjamin Button.

And I'm not here to say that Big Fish doesn't have its rewards (I liked watching Ewan McGregor's sacrificial dedication to his love of Alison Lohman), but by the end, I found myself uncompassionate towards any of these characters, and I'm not sure that I know why.

When Winona Ryder says that "it never snowed," at the end of Edward Scissorhands, it's tidy and it's twee, but it works. When Billy Crudup places his father in the river at the end of Big Fish, his body instantly transforming into the titular metaphor, it feels suffocating, excessive and cloying. In essence, Burton is asking us to believe the impossible - to embrace it - but opposed to his earlier works, Big Fish is a faint, desperate plea.
Posted by Chase Kahn at 3:20 PM