For the first time in his career, Tim Burton brought the spirit and eccentricity of a Roald Dahl novel to his live-action filmography. As a producer on 1996's James and the Giant Peach and writing his own animated film The Nightmare Before Christmas, this would be the first chance for Burton to direct a project based on his most beloved and relatable artists.

Since his youth, he had become infatuated with the writings of Dahl, a voice and a style that indisputably has become evident and traceable in many of Burton's works: "As a child, Dahl was the author who I connected to the most. He got the idea of writing a mixture of light and darkness, and not speaking down to kids, and the kind of politically incorrect humor that kids get. I've always liked that, and it's shaped everything I've felt that I've done." 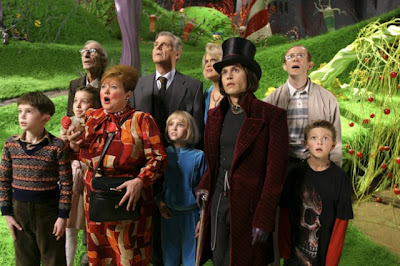 So consider 2005's Charlie and the Chocolate Factory not only as Burton's long-overdue reverential love song to the legendary children's author, but also as a prolonged passing-of-the-torch ceremony between master and apprentice - as if Dahl's novels were, in fact, their own golden tickets, looking for someone to take over the estate.

And for just under two hours, this Chocolate Factory is a full-bore candy-colored pinwheel of Dahl-o-vision. From the opening minutes, which reveal the Bucket home to be a spooky, slanting and angular hideout, it's clear that this is no Mel Stuart film. Although actual countries and locations are named and seen, this placed bears no resemblance to reality, even outside of the Wonka factory.

1971's Willy Wonka and the Chocolate Factory is one my favorite films from my childhood. I remember watching the VHS tape over-and-over again and salivating at the kid-in-the-candystore quality that it exuded. Over the years, this childhood nostalgia has remained as giddy as ever, but has now revealed Gene Wilder's Willy Wonka to be a rich and ceaselessly entertaining performance.

And for all of Johnny Depp's talent and bravery in-front of the camera, his Wonka just doesn't measure up. with his Bardelys the Magnificent wig, his green complexion and pearly whites, he's become Burton's most misguided freak. Speaking with his best Edward D. Wood impression, Depp is still entertaining, his rapport with his ill-fated brats amongst the chocolate waterfalls and everlasting gobstoppers still amusing. 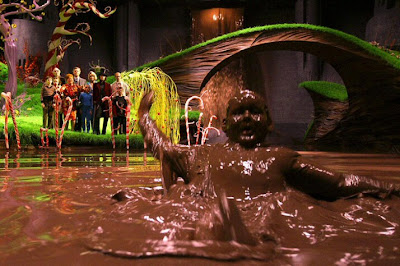 It isn't a bad performance, it's just a bad design choice - here Burton has created the world's most sweet-toothed social outcast and given him all manner of kooky eyewear and clumsy deficiencies (chief among them a lack of awareness as to where his nifty glass elevator is located). The result is a performance that is uncomfortably funny, if nothing else.

My biggest problem, however, lies with the Oompa-Loompa's and Danny Elfman's accompanying musical pieces, which use lyrics from Dahl's story but each take on a different jazzy, poppy, rock sound. With Burton regular Deep Roy duplicating as each and every shin-sized Oompa-Loompa, these scenes are probably the strangest things that Burton has cooked up in one of his film's since Winona Ryder sang and danced to Harry Belafonte.

The film is unquestionably truer to the vision, style and tone of Roald Dahl's celebrated source novel. It's definitely Burton's most kid-friendly live-action film to date and I can only hope that it will and has converted a large number of children into Roald Dahl readers. But, like eating too much candy, the effect of Charlie and the Chocolate Factory is akin to a sugar crash - I suppose you can't accuse it of pulling any punches, but next time, save some room for later.
Posted by Chase Kahn at 3:32 PM