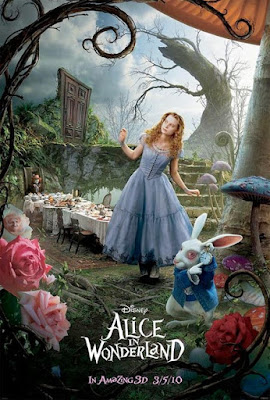 One would suspect that Tim Burton and Lewis Carroll would make a great pairing, for who seems more equipped to bring the eccentric, creature-dwelling world of the oft-adapted children's fairy-tale to the 21st century? After all, Burton is a director who deals in the fantastical and the offbeat.

The trouble is, this Alice in Wonderland is an autopilot yawn of a classical literary dreamscape-turned-fantasy action adventure. It's the result of a director stuck in neutral, spinning his wheels furiously, relying on past tricks to get him out of a jam. As it turns out, Burton is precisely too great of a fit for the material - his unique but sporadically implemented ingenuity and wit excused, taking a movie off.

What Burton and screenwriter Linda Woolverton (Beauty and the Beast) have done here is morphed the episodic point-to-point flow of the source novel and its subsequent adaptations and shaped it into more of a traditionally-scoped and plotted family adventure film, climaxing rather limply with a full-scale battle scene. Lewis Carroll is starting to resemble C.S. Lewis at this point.

Johnny Depp, who is more Ms. Frizzle than Mad Hatter, is showing signs of redundancy and indifference in his Burton roles. Even in a semi-failure like Charlie and the Chocolate Factory, he managed to crack you up every once in a while and maintain a valuable presence on the screen. Here, buried under chalk-white make-up and mumbling dialogue, he's reduced to Burton's rambling, dancing monkey.

His fiancee and neighbor Helena Bonham Carter, the egg-headed Red Queen, doesn't fair much better - crumbling under her own top-heavy frame and the noisy turbulence that spews from her mouth. Luckily, Mia Wasikowska, as the titular adventurer and shape-shifter, provides a stable and youthful exuberance amidst the madness.

Even the surprisingly adept 3D visuals seem timeworn and expected, not to mention visibly dim. But the dimmest of all here is Burton's sense of chimerical wonder and rejuvenation, as his latest film feels self-congratulatory and lazy.

In the end, Alice in Wonderland simply reinforces Burton's life-story, which is learning how to confront and embrace your inner madness - bring out the weirdo inside of you. With Alice, a nearly 20-something daughter of English wealth dealing with the pains and expectations of growing up, Burton is calling the tea-kettle black, for Alice isn't the one in need of a change of scenery.
Posted by Chase Kahn at 2:34 PM