Perhaps the best and earliest example of Capra's penchant for "portraits of optimism" was this 1936 comedy-drama Mr. Deeds Goes to Town. Written by frequent collaborator Robert Riskin from a story by Clarence Budington Kelland, the film earned Capra his second Best Director Oscar statuette in three years and is widely recognized today as one of his best works. 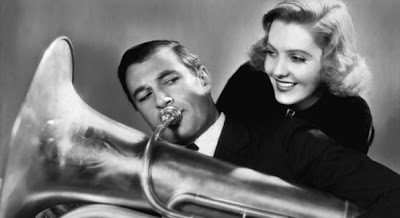 It follows the journey of a small-towner (Gary Cooper) on his way to the top of the social ladder after falling into a $20 million inheritance. Once in the city, the titular Longfellow Deeds sees his moral and rural values clash with the conniving, opportunistic big-city folk, until the fortune becomes too much of a burden to bear.

Deftly mixing comedy and romance, Mr. Deeds Goes to Town is also a delicate social critique and a timely Depression-era wish-fulfillment fantasy. (Deeds' fortune becomes a nifty bailout for the poor and starving farmers of rural America). It also made a star out its leading lady (played by Jean Arthur as a newswoman covering the escapades of Deeds in the big city ) and completely reinvented its leading man.

Gary Cooper, now known for his coy, noble and wholesome performances in films like Sergeant York (1941), Ball of Fire (1941) and High Noon (1952) can thank Capra for laying the groundwork for decades of morally-conscience portraits of selflessness - his work here is very much in the mold of "career-defining".

And although a late-act courtroom scene draws on for about fifteen minutes too long and the whole production feels weirdly indiscreet, Mr. Deeds Goes to Town has laughs and appeal to burn. Shameless optimism has never been so downright rewarding and easy to dismiss.
Posted by Chase Kahn at 6:45 PM