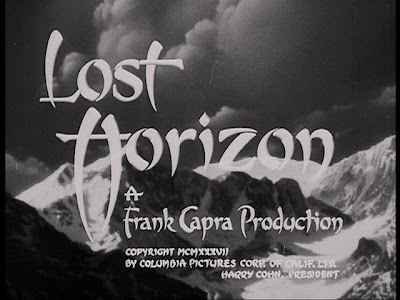 The film that certainly sticks out in the filmography of Frank Capra is his against-the-grain 1937 epic Lost Horizon. By a Tibetan-mile, it was his most expensive film - costing Columbia producer Harry Cohn north of $2 million - and upon its first test screenings (at over three hours long), it was an absolute mess.

To say the least, the film baffled audiences and Columbia execs alike, so much so that Capra cut the prologue, which shortened it to its now 133-minute running time. The film was also long considered lost, until new-age technology was applied to restore it to its best possible quality, nearly the same film that premiered in San Francisco on March 2, 1937. (In the current print, some scenes are either missing or badly damaged, so still photographs are inserted over the original soundtrack.)

Based on the James Hilton novel of the same name, Lost Horizon follows the story of a small band of airplane passengers who crash-land in the Tibetan mountains only to find a Utopian society called Shangri-La, free of crime, sin, conflict and oppression. Most, including our lead Robert Conway (Ronald Colman) are drawn to the peacefulness and serenity of the place, while some, including George Conway (John Howard), his brother, are doubtful of its promises and drawn away, back to the outside world.

The film may have set Columbia back and forged a rift between Cohn and Capra for life, but the gaudiness of the production is nevertheless present in every frame. Even away from Shangri-La and its giant, pristine sets, the scenes in the treacherous cold of the Himalayas are breathtaking, their realism (check out the convincing avalanche in the final act) a far cry from the South Pole escapades in Capra's own aviation adventure, Dirigible (1931).

The brilliance of Hilton's novel is how is places doubt in the mind of Robert near the end of the novel (is this place really magical or is it a prison?) until he ultimately questions the value and possibility of a perfect, everlasting life free from worries or conflict. In the film, Capra dresses up the ending in a tidy fashion - what else? - and prevents the audience from speculating about Robert's whereabouts in what proves to be just one of Lost Horizon's precious few missteps.
Posted by Chase Kahn at 8:58 AM