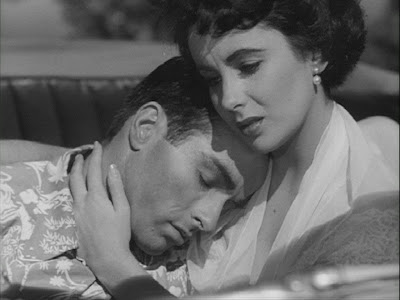 The miracle of George Stevens' dark, ravishing and deeply moving A Place in the Sun (1951) is how it generates such sympathy out of a perplexing, confused and justifiably guilty and sinful character. Montgomery Clift received his second of four Academy Award nominations for his role as George Eastman, the nephew to a powerful business tycoon who lends his hand and offers him a job in one of his factories.

The film evolves into a twisted tragedy (based on a true story) as George impulsively and forbiddingly beds a young worker (Shelley Winters) while concurrently falling for a beautiful socialite (Elizabeth Taylor). When the former reveals her untimely pregnancy to George, he is awkwardly caught between a hazardous double life that causes him to act on - or at least ponder - the idea of eliminating the problem.

George is, at the root of it, a reckless and selfish character, but Clift brings such an innocence and an understandable impetuousness to him that although he's justly culpable for his actions, the events depicted are nevertheless delivered with enough ambiguity that even George isn't sure what happened.

The other half of it is Elizabeth Taylor, who turns in the first truly prestigious and honorable role of her then young career. (Although the Best Actress attention beguilingly went to Shelley Winters that year.) Playing the rich, buoyant Angela Vickers, Taylor initially appears to be a woman of high social standing undeserving of George's gawking, stupefied looks.

But in the two's first encounter - in a quiet, vacant billiards room - Angela appears instantly fascinated by George's coy isolation, leaning against the wall, making him nervous as he lines up his shot.

It's in the couple's second meeting - a radiant and ethereal ballroom dance - that sets this doomed romance on fire. As a credit to the actors, this scene feels unusually impassioned, as if they were falling in love before our eyes, and considering the well-chronicled close-knit relationship between them, they probably were.
Posted by Chase Kahn at 3:38 PM