For some reason I'm woefully fatigued at the thought of writing full-length reviews for Captain America and Cowboys & Aliens, but I've managed to work up something to say about these two films, both of which have their fair share of issues.
- 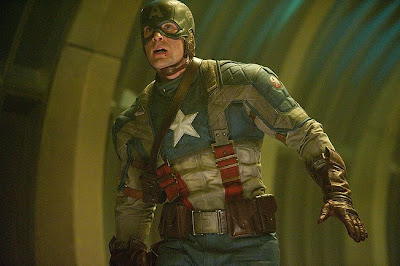 Joe Johnston's Captain America, first off, is really a triumph of sweetly-flavored nostalgia and pure WWII newsprint pulp. I can't say that the film particularly works as an action picture (it's too uncommitted and authorless), but from the art direction to Chris Evans' lead performance, it's wholly likable in almost every way.
-
And I really did enjoy Hugo Weaving's Red Skull (props to the costume, make-up, visual effects departments there) and Tommy Lee Jones' dry, sarcastically humorous Colonel Chester Phillips.
-
Unfortunately, everything becomes quite cluttered and careless once Steve Rogers makes the transformation from scrawny, digitally-wussified asthmatic to bulging superhero. There's one montage too many, a herky-jerky Nazi entanglement and one limp ending - fortunately the film has built up enough goodwill to see it through, albeit narrowly. [B-]
-
Jon Favreau's Cowboys & Aliens meanwhile, while taking a similar trajectory in terms of quality, doesn't just meekly crumble off the screen, it crashes and burns, wasting an assured, imposing performance from Daniel Craig in the process.
- 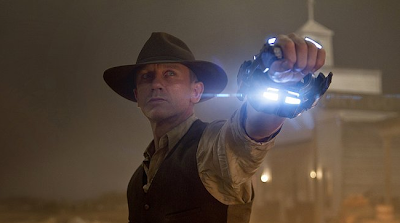 Like that deliciously teasing trailer we witnessed on more than one occasion in cinemas, the set-up here - the film's jangly western beginnings - is solid. Unfortunately the promise of otherworldly visitors dropping down on Absolution (or 1873 Arizona) sounds better than it tastes.
-
Even a stable of five accredited screenwriters can't put their heads together to wring out a more enticing third-act scenario and thus the film absolutely withers once it crosses the halfway point - into a barren, textbook and ferociously silly action climax, abruptly abandoning any previous notion of self-aware genre exploration. By the credits, you'll regret that the film wasn't simply called Cowboys. [D+]
Posted by Chase Kahn at 12:19 PM 2 comments:

-
Sinister, dueling psychoanalyst-thriller feels like an easy Hitchcockian exercise with a fragile heroine, elaborate murder plot and a classic villain, the demented hypnotist David Korvo, played mercilessly by José Ferrer.
-
Targeting a rival psychologists' hapless, delicate wife (Gene Tierney), Korvo unleashes his scheme, which unfolds (and concludes) perhaps a bit too predictably. Yet the film has an economical, hard-boiled veracity that's easy to admire. [B-]
-
"WHERE THE SIDEWALK ENDS" (1950)

-
This Laura reunion (reuniting director Otto Preminger with stars Dana Andrews and Gene Tierney) has all of the necessary elements of a prototypical film noir - cynical detective, angelic femme fatale, textbook fatalism - but its conclusion is overly generous.
-
Andrews is superb as the short-tempered copper whose mistakes lead to his precarious situation which involves covering up a murder and an innocent man's life. If only it stuck with its convictions till the end.  [B]

Posted by Chase Kahn at 3:33 PM No comments:

Transitioning from last fall's quaint, lovely and insufficient preamble comes this summer's theatrical, smothering finale. Whereas Part I of this protracted and bisected conclusion felt congenial yet anticlimactic, Part II is the deluge. Regardless of your preference (upon recollection, I prefer the serenity and desperation of the first), neither film feels wholly complete.
- 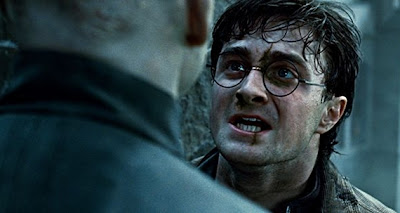 Surely part of the blame lies at the decision to split the final 759-page novel into two disparate films, (which regardless of obvious profitable benefits, have severely crippled the continuity of the series in this writer's opinion) but also at fault is the architect of Hogwarts herself, J.K. Rowling, whose stuttered and bathetic resolution shapes the foundation of this eight and final film.
-
Just take the series of events eventually leading to the final confrontation between Harry and his destined nemesis, Lord Voldemort, in which all manner of silly castle sieges and menial gidget searching cloud the main objective at hand.
-
But perhaps the biggest flaw in the film is its lack of real sustained emotional density (there's certainly none in that dud of an epilogue). The biggest moment in the film comes during the reveal of a certain memory and honestly, the dueling, glass-shattered showdown in the ministry at the end of Order of the Phoenix had more urgency and exigency.
-
And I say this as someone who has a general fondness (even slight infatuation) with this line of screen adaptations overall, but Deathly Hallows: Part II is easily the worst film in the series since Chamber of Secrets - a prolonged climax that nevertheless feels like an inadequate conclusion. [C]
Posted by Chase Kahn at 3:37 PM 2 comments:

"BROADWAY MELODY OF 1938" (1937)
-
MGM's Broadway Melody series hits a subaqueous low with this frantic, unfocused sequel which reunites its colorful cast of lanky performers and slicked-back producers while stretching precariously thin its familiar formula of acquiring finances for a make-or-break Broadway show.
-

Contrary to 1936's refreshing, joyously smiley reboot, 1938's reincarnation is incurably diffuse, clogged and extended with aimless cameos and perpetual plotlines which, in effect, rather muddle the film in a protracted pace towards inevitability.
-
The musical numbers don't necessarily help matters, either. Series regulars "Broadway Melody" and "You Are My Lucky Star" weave in-and-out of the score, but elsewhere, a young 15 year-old Judy Garland belts the participatory "Everybody Sing" and legendary Sophie Tucker croaks through "Some of These Days", both as unmemorable as the other.
-
George Murphy steps in as a potential love interest opposite the toothy, relentlessly talented Eleanor Powell (presumably to eschew the lack of musical talent in Robert Taylor) and the two merrily sing and dance their way in-and-out of the rain during "I'm Feeling Like a Million" - if only it was thunderstorm. [C-]
-
-
"BROADWAY MELODY OF 1940" (1940)
-

The Broadway Melody formula (and its recent downward trend) gets shaken up a bit with Broadway Melody of 1940, a welcomely slimmed-down, ventilated addition to the series, which pairs up stablemate Eleanor Powell with the enduring Fred Astaire.
-
Against type, Powell plays an established dancer looking for a new partner for her routine when her talent scout happens upon Astaire's two-man show at a modest night club. Through misunderstanding, his partner (George Murphy) gets the nod instead.
-
It's only a matter of time before our two stars fall into each other's arms - both on and off the stage - and what the film lacks in spectacle it makes up for in charm. Easily the most straight-forward of the entire series, for what it's worth. [B-]

Posted by Chase Kahn at 9:29 AM No comments: