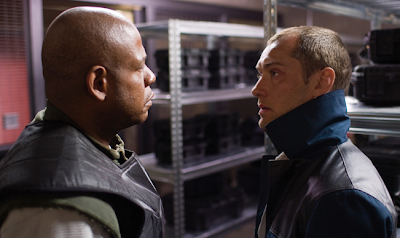 This latest middling blood-splotched action film is based on the novel "Repossession Mambo," which was written concurrently by Eric Garcia as he and Garrett Lerner worked on the script. I don't know who came up with the idea first, these guys or the creators of Repo! The Genetic Opera, but what I do know is that those responsible for Repo Men have seen a lot of movies.

Set in the not too distant future (where the city looks like Blade Runner but the suburbs have twenty-year old gas grills for their red oak patios), a mega corporation known smarmily as "The Union," specializes in outrageously overpriced artificial organ transplants, and when you can't pay the bills, they send in the Repo Men to take em back.

Armed with stun guns, neck tattoos and lots of imported aluminum-canned beer, the best of the Repos are Remy (Jude Law, overqualified) and his best friend from childhood, Jake (Forest Whitaker). They've brought in thousands of unpaid organs, laying them at the feet of their typical bottom-line corporate chief (Liev Schreiber), who you know is phlegmatically evil by the way he stares out of his widescreen office window.

Through Remy's queasily metaphorical narration, we know that he's a man approaching a tipping point. His wife wants him to transfer to The Union's sales department, while internally he questions his methods with Jake (Whitaker), who attempts to justify matters whenever the conversation gets too weighty - "a job's a job," he says.

But, when a defibrillator goes haywire and Remy is unknowingly supplied an ugly, chromic heart of his own, he's no longer adept at his profession - in fact, he's useless. Unable to pay for it himself (and rudely denied an employee discount), he goes rogue with a local dive singer (Alice Braga) who has more artificial organs than Roy Batty.

The inanity and blood-streak belligerence of the final thirty minutes could be attributed to the admittedly sneaky and sly final twist - its pessimistic quality almost hard to resist in a film that seemed resolute - but its enjoyment is entirely predicated on the viewer having never seen Terry Gilliam's Brazil, for Repo Men, with this final act of thievery, assures itself as nothing but trifling mimicry. [C-]
Posted by Chase Kahn at 6:56 PM