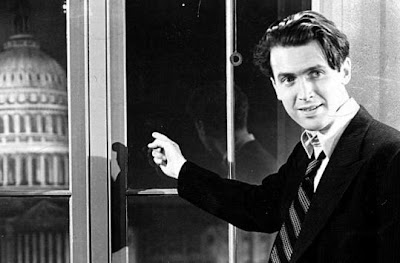 If not Frank Capra's most prestigious and recognized film, Mr. Smith Goes to Washington ('39) is certainly one of his greatest and most enduring, controversial works.

Conceived initially as a direct sequel to Mr. Deeds Goes to Town ('36), the film is glaringly similar in its approach of an altruistic small-town patron who heads off to the big city, falls in love with Jean Arthur and finds their own charitable, optimistic worldview to be unfounded - caught in a stink of corruption and greed.

Where Mr. Smith Goes to Washington becomes a more significant work is in who Capra depicts as the malignant, upper-crust subjects. Edward Arnold as a hoggish, cold businessman is one thing (as he plays in You Can't Take it With You), but Edward Arnold as a state politician in collusion with a Senator (Claude Rains) is another.

And credit must be given to Mr. Capra for stepping into the realm of scrutiny - not towards petty greed-stricken business moguls and upper-class stiffs - but towards the nation's political appointees, shown in all of their indifferent, heartless insensitivity. (Mocking tax dollars in You Can't Take it With You and bank ignorance in American Madness is mild disapproval in comparison.)

The fact that the film screened in Washington with actual state Senators in attendance (who reportedly walked out before its conclusion) is proof of the kind of adverse, radical subject matter that Mr. Smith Goes to Washington was depicting. (Now a days, a film like Paul Greengrass' Green Zone is hardly a surprise.)

But those who, at the time, said that Mr. Smith Goes to Washington was anti-American and pro-Communist were as naive as Mr. Smith himself, excusing the fact that ultimately, the film is about the same mirthful optimism that exudes from all of Capra's works. In the end, Jeff Smith's filibustering triumph under the capital dome is as absurdly hopeful and patriotic as it gets.
Posted by Chase Kahn at 10:55 AM