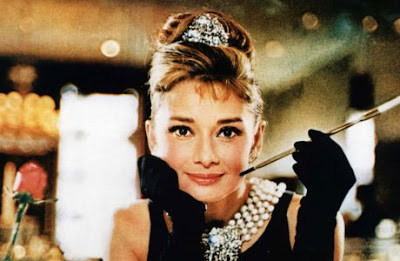 Holly Golightly is a flimsy, materialistic party girl - a pseudo upper-class fashionista who peers into the windows of Tiffany's in order to soothe her anxieties with its glittering cases of serenity and elite status. One would imagine that Truman Capote - who wrote the 1958 source novel - ran into all kinds of Holly's at social gatherings not unlike the one that Audrey Hepburn hosts in Blake Edwards' Breakfast at Tiffany's ('61).

A prickly subject, Hepburn plays Holly with all of her snobbish self-interest while still making the character somewhat endearing and sympathetic as she sips champagne while perched in the sink or slides down the fire escape to her new neighbor Paul's (George Peppard) bachelor pad. Of course, whether that's Holly or Hepburn herself, is a bit harder to decipher.

Darting around Manhattan in search of a suitor (provided the price is right), we quickly begin to realize that Holly is a distressed, perhaps delusional individual on the run from her Texas roots and her ex-husband, Doc Golightly (Buddy Epsen). As she lovingly croons the incessantly prevalent "Moon River" from her balcony one morning, there's a desperate plea in there somewhere - perhaps one worthy of some less-cloying manner of expression.

As Holly becomes closer to Paul the writer, an engagement to a Brazilian millionaire blocks out any and all possible attraction to her comparatively insubstantial East Side bunkmate. Will she change? Will she pursue true love instead of petty fortune?

The conveniently plotted final moments recklessly abandon the ambiguity of Capote's writing in favor of audience compassion. Consequently, Breakfast at Tiffany's amounts to little more than a minor fluff piece, a film worthy of that frivolous title song. [B-]
Posted by Chase Kahn at 1:09 PM