Essentially an inspirational follow-your-dreams sports drama, Broadway Bill is the kind of wish-fulfillment fantasy that audiences ate up in the Depression-era studio age. Equal parts comedy, romance and drama, it's easy to see why audiences and critics lauded the film upon its release and also easy to see why Frank Capra, to his death, was never particularly fond of it. 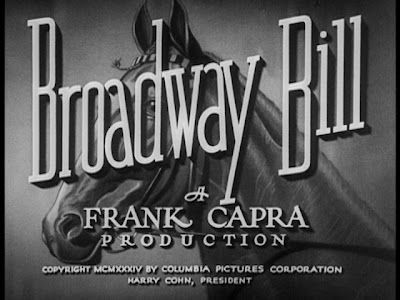 The story of a man (Warner Baxter) who gives up his father-in-law's business and abandons his overbearing wife in order to strive for his lifelong dream of racing horses, Broadway Bill (named after the lightning-fast steed) is a classic underdog feel-good story, the kind Capra relished in producing through the majority of his career.

It's also sentimental to a fault (particularly in its mawkish climax) and the relationship between Baxter and his sister-in-law (Myrna Loy), which is one-sided in its seriousness, is overplayed. Nevertheless, Broadway Bill eventually pulls through as a candid piece of modern entertainment.

(Released and shot after Frank Capra's It Happened One Night, this film was long considered "lost" until resurfacing in the 1990's as twenty minutes shorter, from 125 to 105).
Posted by Chase Kahn at 11:55 AM