While Burton's sensibilities played a key role in revitalizing the superhero genre with Batman, the director appears curiously overwhelmed and unqualified here in this technically fluent yet blundering remake of Franklin J. Schaffner's 1968 classic, Planet of the Apes. Lacking any semblance of purpose or aptitude outside of the realm of make-up design, the film turns out to be nothing more than a bunch of hyper-realistic apes squaring off against a bunch of mechanical, inert humans. 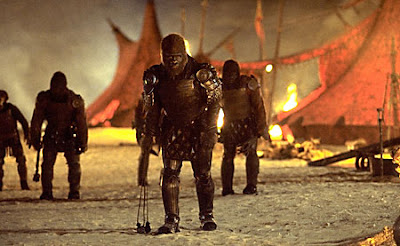 Everything about it, form the unstable interspecies love triangle to the budget-flexing irrelevance of its climactic battle feels like studio-hack regurgitation. Complicating matters is the lead performance of Mark Wahlberg, who just barely fits into his ruffled post-time warp attire and can only manage to clench his jaw and glower in frustration. Even Charleston Heston in his cameo appearance is reduced to mocking his own lines from thirty years ago ("damn them all to hell!") and talking about how guns are dangerous - yeah, right!

If there is one aspect of Burton's Planet of the Apes that really works, it's the apes. Rick Baker's seamless and exquisitely detailed make-up design helps to both maintain the illusion and to allow the actors to distinguish themselves under four-and-a-half hour's worth of ape cover-up.

The way that both the design and the actor underneath complement each other offers up moments of precious synergy otherwise completely absent in the production. At times, momentum is sustained entirely through the performances of Helena Bonham Carter as the human sympathizer and Tim Roth and the garish and brutish General, while Paul Giamatti is interesting, but eventually relegated to Steve Buscemi comic-relief territory.

And considering that things get off to such a great start with one of Danny Elfman's most alluring and spellbinding title themes, it makes the subsequent production all the more limp and ill-fitting. It's a film so plagued by its grand-sweep inanity that by the time it unveils its surprise ending, it feels ever more like the alternate-reality, time-warp hogwash that it is. Welcome to the 21st century, Tim.
Posted by Chase Kahn at 5:39 PM