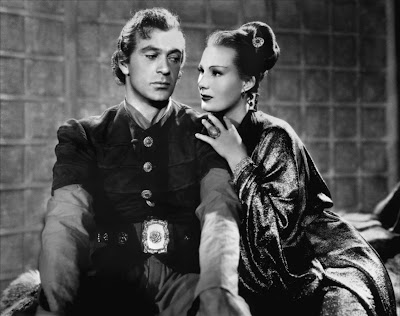 Hollywood invades the 13th century in Archie Mayo's The Adventures of Marco Polo (1938). notoriously known as one of producer Samuel Goldwyn's largest financial failures, the adventure film (very loosely based on fact) is estimated to have lost close to $700,000.

Now, the film itself isn't all that bad - it's a playful, tongue-in-cheek, exaggerated and romanticized account of Marco Polo's real-life trip to Kublai Khan's vast Chinese empire. Once our titular explorer (Gary Cooper) makes a move towards the emperor's daughter (Sigrid Gurie), the ruthless and villainous Ahmed (Basil Rathbone) sends Marco across the Himalayas and puts into action his scheme to take over the throne.

For the most part, The Adventures of Marco Polo is a rather agreeable and slightly amusing adventure film - like a middling Errol Flynn pic. The costumes are aces and the production design is on a first-rate scale, but its pallid, stark-white sets are a bit of a bummer, as is the fact that Goldwyn was forced to shoot in black-and-white when he couldn't get his hands on the then-scarce Technicolor resources.

Its saving grace is it's flippant, casual mood, which lost original director John Cromwell his job when he attempted to play the script straight, resulting in a quick five-day stint before Archie Mayo took over.

But the bottom-line is that Gary Cooper, with his tall, slender, broad-shouldered appearance and Tennessee Valley accent, is hopelessly miscast. Bringing his frank, unassuming and wholesome persona to the role of Marco Polo, Cooper proves to be completely out of his element and the result is flatly absurd.

With the way that he and his romantic counterpart Sigrid Gurie (in her first screen role) awkwardly chat about cultural gaps, the film truly becomes "Mr. Deeds Goes to China" - a line that a certain reviewer wrote upon seeing the film in 1938. Strangely enough, by the time the mustache twirling Alan Hale shows up as the outlawed rebel leader, with his almost offensively slanted eyebrows, you just sort of go with it.
Posted by Chase Kahn at 3:48 PM