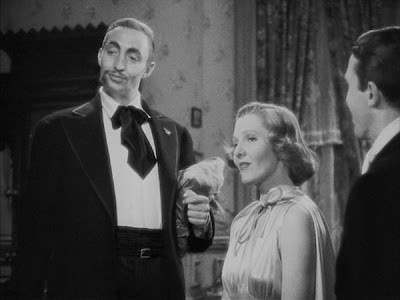 This Best Picture Oscar winner may be Frank Capra's ultimate success, granting the director his third Oscar in five years while going on to become the top grossing film of 1938. A predictable portrait of good old Capra optimism and goodwill, viewers turned off by its foamy sentimentality are missing an exquisitely pointed and downright enchanting comedic work.

You Can't Take It With You is essentially a meet-the-parents social-clash between the upper-crust, highfalutin Kirby's (with their tall, gentle son, James Stewart) and the merry, lower-class hooligans, the Sycamores (with their sweet, angelic daughter, Jean Arthur.)

Based on the 1936 stage play by George S. Kaufman and Moss Hart, the film is ultimately about the value of priceless commodities like friendship and family while taking calculated shots at the cold, corporate business life and, wherever possible, those men in Washington. (Although, we'll get to that in Capra's next film.)

As the predictable roadblocks and pitfalls halt the young couple in reckless, naive love, the Sycamore's grandpa-on-crutches (Lionel Barrymore, suffering on screen from a fall down the stairs - in reality, suffering from arthritis) is slow to give the Kirby's and their snotty superiority a piece of his own mind, but when he does, he exposes both the mean-spirited nature of their actions and jeopardizes the relationship linking these unlikely families together.

Of course, this being a Capra film, we know where this ordeal is headed and the question isn't so much if this blithe and bathetic finale is going to occur, but when. Nevertheless, it's a testament to the man behind the camera (and the performers in front of it) that the moment when Mr. Kirby finally sheds his Scrooge facade works as well as it does - the rousing final moments as welcome as they are inevitable.
Posted by Chase Kahn at 10:43 AM