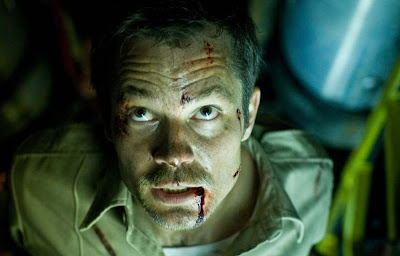 A virus is afoot in a quaint Iowa farm town in Breck Eisner's The Crazies, but this isn't your average Dustin Hoffman pandemic of vaccines, monkeys and puffy eyes. Well, okay, there are those (along with a hell of a bloody nose), but the victims of the mysterious illness here - coursing with icky black veins and suffering from an apparent weight fluctuation - appear only at ease with a good dose of killing.

And so Johnny Cash's "We'll Meet Again" ironically foreshadows the madness about to be unleashed upon the tight-knit community of Ogden Marsh, with their baseball games and their all-American couple - Sheriff David Dutton (Timothy Olyphant) and his wife Judy (Radha Mitchell), the town doctor.

In this day-and-age of 70's and 80's horror revival, The Crazies draws upon a lesser-known '73 film of the same name from the output of zombie-king George A. Romero. Although the afflicted are never referred to as "zombies" in Brock Eisner's update, that's more or less what the film amounts to, with a good helping of governmental closeting mixed in. (Hazmat crews and masked-soldiers swoop in to "assess" the situation and contain the sickly, as if things weren't bad enough.)

And thus when Sheriff Dutton (Olyphant), his pregnant wife Judy (Mitchell) and his deputy, Russell Clank (Joe Anderson) escape the roundup and attempt to evade both the portly infected and the insensitive fatigues, The Crazies becomes a set-piece driven chase film that's as breezy and amusing as it is loud and disposable.

Our triumvirate manages to show up at just the right time to keep each other alive, supporting characters are introduced only to be offed in due time, and the new-wave horror tactic of manufacturing suspense through jump-scares and prolonged bad-guy motives all give the film a feeling of familiarity and certainty that drowns the proceedings.

There are exceptions, of course, as evident during an excruciating and deliciously-conceived automatic car wash, or through the psychological paranoia that sets in during the latter half over who's infected or just mentally cooked - but all of this just goes to show how content with mediocrity the whole production is. For all of the blatant attempts to get a rise out of the audience with the humdrum jack-in-the-box routine, the most frightening thing in here is Deputy Clank's moral deterioration. [C+]
Posted by Chase Kahn at 9:30 PM