Tim Burton first saw Stephen Sondheim's Broadway musical back in London in 1980 as a CalArts student. Needless to say, he fell in love it, jumping at the opportunity to adapt it for the screen after Sam Mendes (who had been working on an adaptation for some time) dropped out. 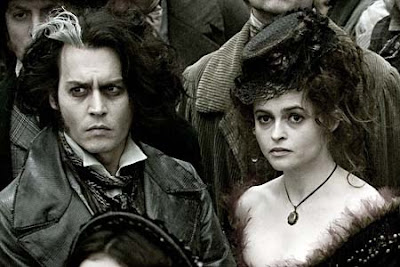 In reworking a 3-hour stage musical for a 2-hour screen version, Burton and screenwriter John Logan worked tirelessly to shorten songs, while completely omitting others and still maintaining a sense of forward progress and faithfulness to Sondheim's vision.

The outcome is a predictably well-fashioned and well-designed production (as is usually the case with Burton and his crew) set to Sondheim's wonderfully sinister and comedic musical opus. But perhaps the greatest reason why Sweeney Todd really works is due to Burton's use of actors instead of singers.

Johnny Depp and Helena Bonham Carter probably wouldn't make it to Hollywood week on "American Idol," but they make up for it with pure conviction, lending more that just a voice to their characters.

And although most of Burton's films, through their own darkened, ghoulish view, ultimately end on a note of optimism, Sweeney Todd is an unusually tragic affair. It's also easily Burton's best film since the turn of the century - provocatively grotesque and bloody good fun.
Posted by Chase Kahn at 8:45 PM