"Give Me That Ole Time Religion"

I've never really watched a Howard Hawks film without finding some kind detraction or speed bump along the way and Sergeant York (1941) certainly has plenty of those (it's too blatantly beatific and shamelessly patriotic), but in terms of pure entertainment value and re-watchability, it never gets old. I love watching Gary Cooper and Joan Leslie and the two-act structure of hometown Tennessee life juxtaposed against Alvin heading off to war. 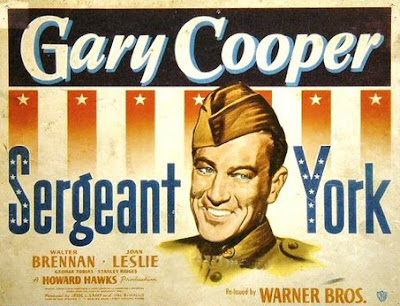 But that devout reverence and naive righteousness evident throughout Sergeant York is what plagues many of Hawks' films. Rio Bravo is too sing-a-long preppy and not nearly as good as High Noon. Red River falls completely apart in the final five minutes because it can't possibly condemn John Wayne as any kind of faulty character. Even Bringing Up Baby, as funny as it is in stretches, asks us to somehow like and fall over for Katharine Hepburn's obnoxious and clumsy Susan Vance.

I'm not saying that Howard Hawks is incompetent, because his films have massive followings and occasionally they really work. I like Sergeant York and I really like The Big Sleep and His Girl Friday, but this sequence (specifically the last five minutes) highlights precisely what irks me about some of his films.