I would be delighted if this 3.29 Playlist report/rumor turned out to be true regarding the possibility of Rachel Weisz being cast as the main antagonist in the next Bond film, to be directed by Sam Mendes. 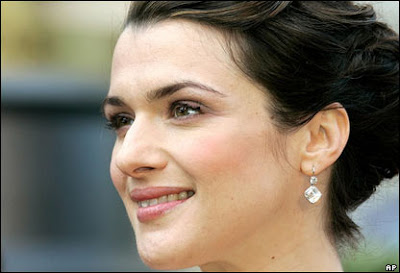 Weisz needs a bit of a high-profile release to get her back in the limelight after films like Agora, The Lovely Bones and The Brothers Bloom have struggled mightily to gain much of an audience with the former struggling just to gain distribution in the U.S.

It wouldn't only be great for Weisz, but for the Bond franchise as a whole, which if you ask me, hit a wall with Marc Forster's Quantum of Solace. Now if we could only get Thom Yorke to sing the title song.
Posted by Chase Kahn at 9:26 AM