I'm going to see Paul Greengrass' Green Zone sometime this weekend, despite its assorted and collective buzz as something trivial and outlandish. (It currently holds a 50% Rottentomatoes score). 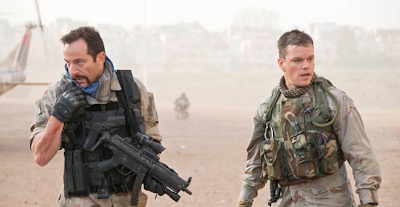 Most reviewers have kicked up a storm because Brian Helgeland's script strays far from the source novel by Rajiv Chandrasekaran and plays up the one-man thriller elements, resulting in something far less substantial and more ludicrous. So much so, that Roger Ebert, in his 4-star review posted today, felt compelled to issue a defense of the film:

"Yes, the film is fiction, employs far-fetched coincidences, and improbably places one man at the center of all the action. It is a thriller, not a documentary."

I'm also interested (as I would imagine many people are) to see what a big-budget action-thriller placed in the Iraq War looks and feels like after the well-earned success of Kathryn Bigelow's The Hurt Locker.
Posted by Chase Kahn at 10:18 AM