Thoughts on "The Descendants", "Hugo"

I've been furiously trying to put together my final projects for school, spend time with the family and still keep up with the latest movies, so consider this a what-have-I-seen-lately purge, of sorts.
-
First up for Thanksgiving week was Alexander Payne's "The Descendants", a nearly de facto Oscar contender far before anybody had the chance to see it, what with its behind-of and in-front-of-the-camera talent.
-

What I found was a film that was certainly the work of a singular artist, of brave tenacity and real-life sensation (how else do you describe a film that so dryly, so openly spews vitriolic daggers at a helpless, soon-to-be-deceased loved one?) that nevertheless produces a highly unemphatic and resoundingly pat resolution about the importance of family.
-
Considering the pedigree of Mr. Payne (a man I still adore for his smashing 1999 high-school satire, "Election"), the biggest condemnation I can lay at the feat of "The Descendants" is that, despite its warped, almost uncomfortable mid-life cynicism, it's resoundingly bland.
-
Its more elevated attempts at a laugh are both broad and vulgar and rely almost solely on a paper-thin iteration of a supporting character, the long-haired, surfs up boyfriend, Sid, who seems to be there for no other reason than he makes a good punching bag.
-
Not to mention the film's nearly unlistenable soundtrack, which barely wavers from emotive native-tongued moaning over a ukulele or other slack-key guitars, proving about as useful an adhesive between scenes as a moist piece of chewing gum.
-
I do give the film credit for important yet all-too-rare refusals to adhere to formula and going in some surprising places with a few supporting characters, yet these exceptions eventually prove to be far too infrequent, the film, far too floral and flavorless. [C]
-
On Thanksgiving Eve Day, I ventured into Martin Scorsese's "Hugo" blissfully unaware of the magical cinema voyage that I was about to embark upon. Upon first glance, the film may seem like an artist attempting to slum it with a base genre film (in this case, a eye-popping children's 3D adventure), yet the film that "Hugo" is at the beginning is far from the one you end up with in the end.
- 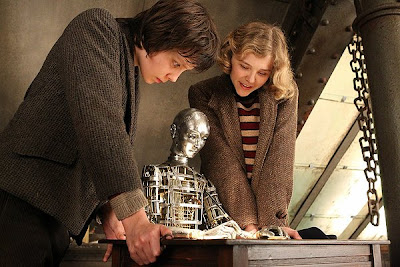 Surprisingly, it's a Scorsese film through-and-through, full of his technical virtuosity and camerawork, his protracted, elusive story structure and his impassioned love for the cinema and its history and preservation.
-
It's very much a film that will leave too many young viewers a bit groggy and tired with its bloated running-time and scarce comedic gags, yet their paying adults will recognize and respond to its sweet, cathartic resolution of life-remembrance and the reconstruction of a lost artist.
-
In this way, "Hugo" is the stealthiest, most auteuristic family-marketed film since Spike Jonze's "Where the Wild Things Are". Both are not only fantastic films, but examples of talented directors working outside of their comfort zone (established properties for big money studios) that nevertheless feel like the work of nobody else. [B+]
Posted by Chase Kahn at 9:28 PM No comments:

When 81 year-old (and presently overactive) Clint Eastwood was announced to take on a biopic on the founder and long-time director of the Federal Bureau of Investigation, one would not have predicted a film that not only examines Hoover's precarious, reckless and secretive methods, but his (mostly speculative) life as a closeted homosexual.
-

Although seeing as the script (a largely muddled and circular narrative, with nary a steady moment in sight) was written by "Milk" scribe Dustin Lance Black, an openly gay rights activist himself, the film, what with its repressed, tragic love story at its center between J. Edgar (Leonardo DiCaprio) and Clyde Tolson (Armie Hammer), seems to make a bit more sense.
-
Beginning in the early 1920's and ending with Hoover's death in 1972, the film blurs by and touches upon the long-standing and controversial FBI director's career, from his days fighting gangsters in the Depression to the kidnapping of Charles Lindbergh Jr. to his last days protecting secret files from the President.
-
Eastwood is in comfortable visual form here, using, as he once did with "Flags of Our Fathers", "Letters From Iwo Jima" and "Changeling," his prototypical desaturated colors and dramatic side-lighting with extreme contrast, in flickering quantities, the illusion of black-and-white.
-
Yet I sense, no matter what his ideals are, that he's uncomfortable with at least a minority of the film's homosexual context. Not that he's homophobic or physically repelled by it, but just simply naive to it, for these scenes seem unfit for the sledgehammer subtleties of Clint.
-
Or perhaps what I'm sensing is a disconnect between performers, or perhaps performers and their older, liver-spotted self. Leonardo DiCaprio, no stranger to early 20th-century biopics himself, is able, even exceptional at times, as the titular J. Edgar Hoover, although his partner-in-crime-stopping, Clyde Tolson, portrayed by Armie Hammer, has so much bad make-up on in his final moments that we almost forget who he is.
-
Throughout the film, there is the faint echo, the glimmering legibility of the portrait of a man in denial, in seclusion, in frustration to come to terms with who he is - the legend that will be printed in his untitled biography or the real man behind the facade of his elevated desk - yet the film's emotional center is nearly mute, muffled under the weight of prosthetics and fast-walking ineptitude. [C]
Posted by Chase Kahn at 7:16 AM No comments:

I'm not a particularly knowledgeable or dependable barometer on the canon of DreamWorks properties post-2001's "Shrek," but I can say that "Puss in Boots," the latest offspring of that film that so enchanted viewers a decade ago, is better than the last two sequels and I haven't even see them.
-

Which isn't so much a gleeful rave of this feline spin-off, but rather a condemnation of the floundering "Shrek" franchise that so dwarfed most of the goodwill from the original with its three sequels, each more punnily titled than the last.
-
Having said that, "Puss in Boots" is, for the most part, a pretty delightful little film, a Zorro-styled sand-and-sun swashbuckler with traces of Spaghetti western elements all under the umbrella of DreamWorks Animations' cheeky realm of fairy-tale satire.
-
There are portions of the film that reek of narrative convolution (holy flashback!) and childish pandering (we have to end every animated film with a dance number?), but on the whole, the film - essentially a Cain and Abel tale set against the backdrop of a quest to find the golden eggs up Jack's beanstalk - has a classic adventure feel that the filmmakers clearly mined for inspiration. [B-]
Posted by Chase Kahn at 10:48 AM No comments:

There's been so much news-feed garbage piling up about these two dueling "Snow White" projects that I'm not even sure I can separate the two, yet Rupert Sanders' "Snow White & the Huntsman" is the first out of the gate with a trailer.
-

-
I have to say, at the very least, it doesn't look just all that dreadful, does it? I'm convinced the music is some sort of remix of Zach Hemsey's trailer music for "Inception," but I'd imagine that Universal is going to turn quite a few heads with these two-minutes.
-
The other project, by the way, is Relativity's "Mirror, Mirror", set to release in March of 2012 with Lily Collins as Snow White, Julia Roberts as the Queen and Armie Hammer as the Prince. Tarsem Singh will direct.
Posted by Chase Kahn at 8:30 AM No comments:

Brett Ratner's fortunately topical "Tower Heist" is, for its majority, a semi-flat, moderately engaging heist comedy that nevertheless never really takes off. That is, until Eddie Murphy shows up.
-

The highly-skilled, highly-missed comedic actor, who disappeared into a vat of atrocious, doughy children's films for the last decade including "I Spy", "Daddy Day Care" and the abominable fat-suit comedy "Norbit", has returned to nearly peak form here as the petty criminal Slide, whom Ben Stiller enlists as the mind behind the crime due to his apparent experience in the matter.
-
Of course the film quite amazingly mirrors the current events at Wall Street and cities around the world, where protesters line the streets damning the corporate greed and imbalance of power which so permeates the country.
-
"Tower Heist," which gives a face to this ruthless greed in Alan Alda's Arthur Shaw (who among other crimes, has essentially stolen all of his employees' life savings) is very much the 1%, his scheming, revenge-minded tower-servants, the other 99.
-
Contrary to Andrew Niccols' sloppy, half-baked "In Time," which uses the current social unrest and lopsided power balance to allegorical effect, "Tower Heist" makes no mistake, bringing its power-to-the-people agenda to the forefront, the here and now.
-
It's true that the film likely works better as a slice of our times wish-fulfillment rather than a comedy, yet in a film that's full of performances either disappointing or merely adequate, Murphy's presence is a giddy sight for sore eyes that considerably elevates the proceedings. [B-]
Posted by Chase Kahn at 8:05 AM No comments:

In what I hope becomes a weekly series here at The Ludovico Technique, I'm hoping to mirror (or rather copy) the excellent weekly podcast out of Chicago, Filmspotting, and doing my own Top 5 list in accordance to their designated topic.
-
Last week it was Top 5 Director Departures (in response to Kevin Smith directing "Red State") and thus, I'm here to provide my own list of five of the more unique, who-saw-that-coming directorial departures, so here we go:
-

Alfonso Cuarón, "THE PRISONER OF AZKABAN" (2004)
-
The Mexican-born director of "Y tu mamá también" certainly couldn't have been the obvious choice to adapt the third of J.K. Rowling's decidedly British mega-novels, yet the film is often cited as one of the best in the series. "Azkaban" was certainly a massive leap forward for the series, maturing the previous films' glittery, pre-pubescent messiness into the realm of the wicked.
-
#4
-

The British prestige director, most noted for his costume dramas "Pride & Prejudice" and "Atonement" would seem to be the least likely candidate to have directed this (excuse my bluntness) badass action-film fable about a mysterious teenage girl (Saoirse Ronan) on the run from secret government organizations. The film bears Wright's trademark camerawork, yet its electro-pop soundtrack and idiosyncratic characters put Mr. Darcy firmly in its rear-view.
-

Robert Z. Leonard, "THE BRIBE" (1949)
-
In perhaps the ultimate departure, one-man MGM musical factory Robert Z. Leonard directed this stylish, sleazy noir, the vastly underrated and underexposed "The Bribe". Considered a fairly substantial critical and commercial disappointment, the film, essentially a slip-shod 'B' movie at MGM, is surprisingly a rather brilliant and convoluted film noir with luscious atmosphere (it takes place in Central America) and a climactic shootout amidst a fireworks show that is quite the set-piece.
-

-
Frank Capra, "LOST HORIZON" (1937)
-
I've never considered "Lost Horizon" to be an overwhelmingly terrific film, but I'm an absolute sucker for Golden Age meccas (that is, larger-than-life Hollywood productions) and Capra's "Lost Horizon" is not only a remarkably well-made super-sized epic (based on James Hilton's novel about a plane that crashes in a utopia in the Himalayas) but a rather stark contrast to the kind of idealistic social/political dramas that dominated Capra's filmography.

Settling on Upton Sinclair's novel "Oil!" as a source of inspiration and adaptation, Anderson loosely crafted a sprawling oil epic the likes of which no one could have anticipated. The film, which examines the ruthless Daniel Plainview (Daniel Day-Lewis) as he maliciously, uninhibitedly carves out a wealthy business in the California oil fields, is an American masterpiece about greed, corruption and the morally bankrupt pursuit of wealth and power.
Posted by Chase Kahn at 7:39 PM No comments: