For those who love the wittiness and screwball mystery of W.S. Van Dyke's The Thin Man ('34) or After the Thin Man ('36), need look no further than Stephen Roberts' Star of Midnight ('35). 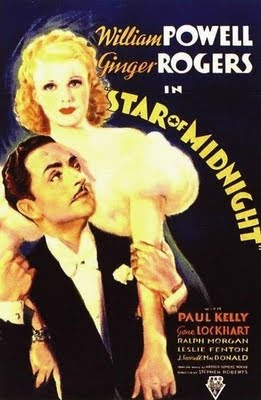 Starring Nick Charles himself (William Powell in one of his last roles for RKO before signing exclusively with MGM), Star of Midnight makes no mistake of its intentions - a playful, sarcastic kid-sister romance and scotch-and-martini jokes wrapped around a scandalous New York City mystery purposely evokes the Hitchcockian zest of those early Thin Man smash-hits.

Even Ginger Rogers (taking a break from her dance partner Fred Astaire) mocks the gaudy glamor and comedic timing of Myrna Loy, even scrunching her face at a sly comment from her counterpart detective whom she flirtatiously calls "Sherlock." (He fires back with "Watson.")

And when Powell's Clay Dalzell attempts to solve the crime by using the patented Nick Charles maneuver of inviting all of the suspects to get together at the end, we're too busy reveling in the zany one-liners to even notice the similarities. Star of Midnight is one enjoyable and authentically molded rip-off.
Posted by Chase Kahn at 7:21 PM