Perhaps it's my unabashed affection for early studio-era action films, but I found David Miller's Billy the Kid ('41) to be a perfectly watchable MGM Technicolor western.

It's a standard, unsurprisingly romanticized dream-factory interpretation of the legendary outlaw, complete with the Cain and Abel narrative backbone between Billy the Kid (Robert Taylor) and Pat Garrett (Brian Donlevy), but I think it holds its own against a moderate film like Henry King's Jesse James ('39). 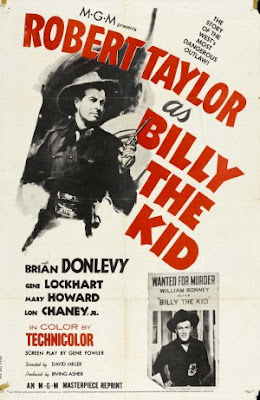 The film didn't perform particularly well at the time of its release due to the typecasting of its lead, Robert Taylor as a "pretty boy" who didn't have any "hair on his chest." Brian Donlevy, who specialized in these kinds of films in Cecil B. DeMille's Union Pacific ('39) and George Marshall's Destry Rides Again ('39), is oddly positioned as the moralistic peacemaker.

Westerns received a large bump domestically during this time due to the fledgling European market as a result of WWII. Stagecoach ('39) elevated the genre from its B-movie roots, and while Billy the Kid ('41) certainly feels like a mid-level project on paper, it looks like anything but.
Posted by Chase Kahn at 10:54 AM