Known more as the film that was interrupted by Montgomery Clift's damaging car accident than anything else, Edward Dmytryk's Raintree County ('57) was billed as the next-gen Gone With the Wind, filmed for the first time in Ultra Panavision (aka MGM Camera 65), which would later be used on William Wyler's Ben-Hur ('59). 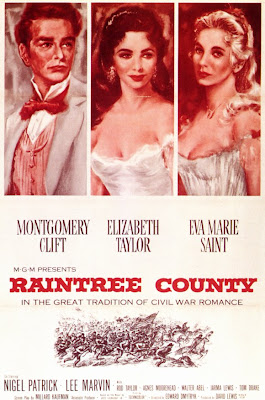 Based on Ross Lockridge Jr.'s 1948 novel of the same name, Raintree County is a sprawling, decades-spanning summation of 19th century America. The novel may be a revealing and accomplished look at Civil War-era social issues and myth, but the film is anything but.

It's basically competently staged and constructed period glam - a well-dressed, glossy MGM Technicolor widescreen epic that strives to capture that tumultuous, ever-changing landscape of the mid-19th century and all of its illustrious, romanticized beauty. Instead, Raintree County feels like an overcooked, monotonous concoction with half of the appeal of Gone With the Wind and twice the pettiness.

Shooting was suspended for two months while Clift recovered from his gruesome accident, his scenes dissected by those shot beforehand and those shot afterward. (The difference isn't as discernible as you might expect - the effects of the accident are revealed strangely from within and from the subtle numbness and slight disorientation of the left side of his face.)

Eva Marie Saint and Rod Taylor also have sizable supporting roles, but it's Lee Marvin of all people who injects some life into this 188-minute marathon, a film that is certainly watchable as a piece of cinematic history, but a downright disappointment considering the talent involved.
Posted by Chase Kahn at 3:18 PM