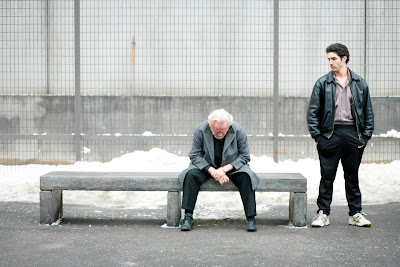 There's a scene in the early moments of Jacques Audiard's affecting and absorbing A Prophet in which our protagonist - the 19-year old Malik El Djebena, newly imprisoned, unassuming and raw - is approached by an apparently well-established figure in the prison yard (measured by the size of his entourage) about performing a certain task for him.

It's the heinousness and the persuasiveness of this early act - built-up to a nearly unbearable tension and delivered with startling conviction - that ensures the kind of viewing experience that awaits in this ineffaceable, heavyweight prison drama.

Essentially chronicling the unlikely rise to the top of the French underworld - both inside and outside of the prison - by the scrawny and quick-learning Malik (an Arab played with a genuine vitality by Tahar Rahim), the film is two-and-a-half hours of nail-biting crime drama set within a rigid, hostile, cage-rattling atmosphere.

Morphing from manager to survivalist to schemer, Malik soon learns (though not without trepidation and hardship) his role to play in the power struggle between the Arabs and the Corsicans through the persuasion and assistance of spiritual elements, handled with a subtlety and a grace that grants the film a unique resonance otherwise excluded in the crime-world genre.

Punctuated with inter-titles and soft fades-to-black, A Prophet never fails to feel like anything less than the singular vision of its artist. Inspired to make the film after a screening at a French prison, Jacques Audiard, in this his fifth feature, delivers nothing less than a masterwork.

As Malik takes his place in the yard near the end of the film - his ruthless mentor left to share a bench across the way, isolated and powerless - the journey from hack to king, from apprentice to master and from victim to prophet is at last complete. That the transformation doesn't become entirely evident until that moment is one of the film's greatest rewards - I can only wait to experience it again. [A]
Posted by Chase Kahn at 10:50 PM