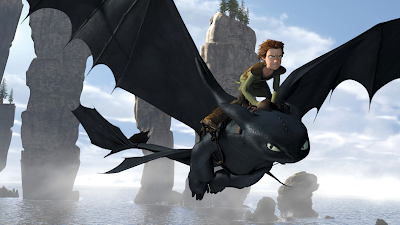 For all of the blundering, hazardous mass-market kids films that get released on an almost weekly basis (just see Tim Burton's Alice in Wonderland) and with the usually reliable beacon of sophistication apparently out of ideas (see Pixar's Toy Story 3), it's mighty refreshing to see a piece of children's animation this full of life, especially considering the source.

Dreamworks has always been second-fiddle to Pixar in terms of artistic quality, their films normally tainted with an overwhelming sense of pop culture brushstrokes and audience pandering, like a grade-schooler making fart noises. But here, with the irresistible How To Train Your Dragon, the studio exercises surprising restraint in bringing to life a film more concerned with emotional story pull than with silly comedic grubbing.

Set in the Viking Age, in the fictional sea-side town known as Berk, the film quickly establishes the conflict between man and beast in the opening scene. The dragons (in all of their differing, colorized quantities) attack from above while the Vikings (with the elders built like bearded Hulk's and the younglings like emo quasi-hipsters) fight back, dispersing the fire-breathers in-between neighborly "good mornings".

This scene, which serves as an introductory roll call of sorts, is voiced-over by our measly protagonist, Hiccup (voiced by Jay Baruchel, who if we're staying with the current Apataw brand-of-the-month, is about a 3). He's scrawny, he's squeaky, and he is the antithesis of his brutish bear of a father, the village leader Stoick (voiced by Gerard Butler).

When Hiccup blindly snares one of the dragons in his handy net-canon, he discovers that he can't bring himself to kill it, establishing a hesitant yet brotherly inter-species bond between the hunter and the hunted. And it's here (as Hiccup crosses over to the "other" side) where How to Train Your Dragon turns into the peaceful, pro-ecology, anti-domineering message film that it is, something that we've admittedly seen countless times before (especially recently).

However, once it settles into its groove (and the Viking jokes seem purged from focus), the film exudes a kind of undeniable grand-sweep that classics are made of. Whether its flexing its muscles during the climactic battle scene or tenderly depicting the quiet moments between a boy and his dragon, the results are magical.

And the 3D visuals - a new watermark for the animated medium - are never less than wondrous, evoking the same kind of escapism and technical immersion that made the similarly-plotted Avatar a multi-billion dollar worldwide hit. The difference lies in the pre-loaded anticipation and murky histrionics of the latter. With all due respect to James Cameron, here is a film that reinforces the wonder of cinema. [B+]
Posted by Chase Kahn at 2:58 PM