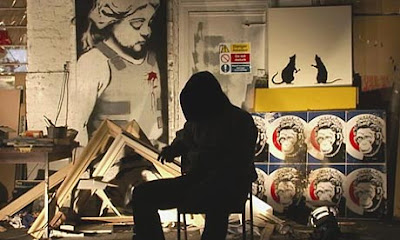 A documentary that's equal parts absorbing and accomplished, Exit Through the Gift Shop breezily chronicles the brief history of both British and Los Angeles street/graffiti artists who erupted at the turn of the century while eventually turning into an exploration of the all too thin line between the artful and the trivial.

The film begins as a study of the camera-obsessed Thierry Guetta who began to record hours and hours of footage documenting the exploits of graffiti artists on both sides of the Atlantic. When he finally catches up with the notoriously hard-to-find master of the trade, British-based artist Banksy, the film turns an unlikely friendship into a study (or a mockery) of the modern art world.
Mr. Thierry Guetta, looking like a more urbanized and paint-crusted version of Stanley Kubrick, can hardly even express himself verbally, much less as an artist, as he takes on the pseudonym Mr. Brainwash and attempts to break into the high ranks of the street art exhibition world. Is Thierry a phenom? A force of nature? A complete joke? That's for the viewer to decide, although Banksy (speaking with his face shadowed and his voice modulated) has his mind made up.
There's been a lot of speculation as to whether Banksy set-up the entire second-half of the film in order to make his point or if he was just lucky enough to capture the puerility of Thierry's transformation into Mr. Brainwash and thus the easily deceived L.A. art world vultures, who payed millions to buy his work anyway at his debut exhibition. Whether it was genuine or not is irrelevant, for either way, the point is well-made.
Exit Through the Gift Shop isn't just the story of the modern street artist tagging his way through Bristol or Los Angeles, what Banksy has done is expose the world of modern art, his world, through the exploits of a cheap imitator. Thierry never made his documentary for Banksy, which was intended to restate and readdress the meaning of the street artist, but what Thierry did instead, knowingly or otherwise, will work just fine. [A]
Posted by Chase Kahn at 8:23 AM