The Death of Night

Thanks to /Film are in order for posting the final poster for M. Night Shyamalan's The Last Airbender (7.2.10), which obviously looks atrocious and I've been wondering about its prospects for a while and can only come up with one response:

Who the hell is going to see this thing? The Last Airbender is based on the anime series "Avatar: The Last Airbender" (the name was dropped for Mr. Cameron) and I doubt anybody even knows that. It has nobody in it except a Twilight peripheral (Jackson Rathbone) and Mr. Slumdog (Dev Patel), and it just don't think it looks compelling enough to draw in curious moviegoers. 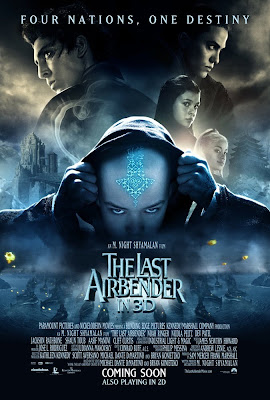 I just have a feeling that this could be the end for one M. Night Shyamalan, who has been in a severe tailspin ever since the last five minutes of Signs. As bad as his past movies has been (The Happening, The Village, etc.) they at least made a little dough.

And I mean the end as in, good luck getting a $100 million budget again. Come to think of it, perhaps a little budget-cutting is exactly what he needs. As Matthew Weiner, the creator of Mad Men said, "budget restrictions spur creativity."
Posted by Chase Kahn at 4:22 PM