I love the idea of this Ridley Scott retrospective/reevaluation and The Playlist Nation doesn't disappoint with their harsh criticisms at turns, yet noble reverence when needed and deserved. From top-to-bottom, the crew quickly revisits the filmography of much-disputed American action filmmaker Ridley Scott, from Alien to Body of Lies. 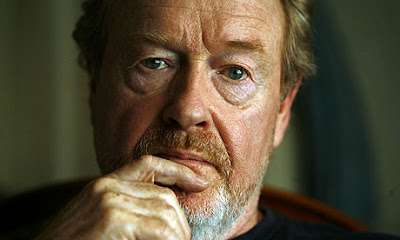 For the most part, they get it right. Blade Runner ('82) and Alien ('79) are undisputed masterworks, two of the most influential, fully-formed and expertly-designed science-fiction films of the last thirty some-odd years.

Kingdom of Heaven ('05) is a slog. I know the director's cut has a sparkling reputation these days, but until they can edit out any scene that Orlando Bloom is in, it still sucks, I'm sorry. Gladiator ('00) is a ripe piece of entertainment to this day, nearly impossible not to enjoy on some level despite a clear-cut Hollywood presence at every turn. It's not a "great" film so-to-speak, but it clearly works because the scale matches its emotional pull.

Legend ('85), which I reviewed a few months ago, is quite remarkable in many ways despite the fluttering, fairy-tale syrup. Like his previous films, it's a visual marvel, and despite the elementary simplicity to the tale, there is genuine dread and darkness in Tim Curry's evil Lord - it's certainly one of Ridley's most underrated and undervalued films.

Mia Sara and Tom Cruise in Ridley Scott's Legend (1985).
And finally, American Gangster ('07) and Body of Lies ('08) should be flipped. The latter is a middling, uncontentious spy thriller and the former actually works on a narrative level. I know I'm in the minority, but I actually liked American Gangster when I saw it in theaters three years ago and I still like it today.

Once again, for the full list of The Playlist's Ridley Reevaluation - including grades - go here.
Posted by Chase Kahn at 12:23 PM