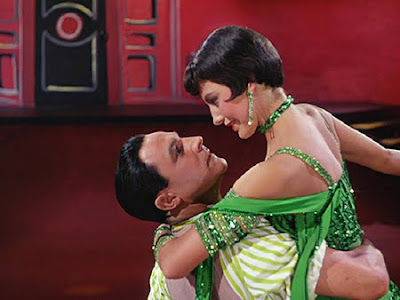 It's not a radical opinion to hail Singin' in the Rain ('52) as the greatest musical of all-time or even to simply profess it as a personal favorite. Certainly not for a film that routinely finds its way to the top of any self-respecting "greatest of" list and its title song (first heard in Hollywood decades prior) can be hummed by almost anybody, regardless of whether or not they've actually seen it.

Preceded by An American in Paris ('51) and followed by The Band Wagon ('53), the film was released at the height of Arthur Freed's prowess, producing both critically-acclaimed and financially profitable musicals at MGM. But in terms of crafting a high-energy Technicolor spectacle, he and director Stanley Donen never equaled the charm, the affluence, or the vitality of Singin' in the Rain.

The perfect confluence of song, dance, sugar-spiked romance and Hollywood satire, the film is one of those rare Hollywood musicals without a flaccid note, number or scene in sight, utilizing its well-rounded cast and catchy verses to win us over time and time again.

Gene Kelly has always been my favorite male dancer for his acrobatic foot-stomping and self-choreographed synchronizations with his dance partners, be it male or female. His genius isn't more readily apparent than on the tongue-tied musical number, "Moses Supposes," in which he and the classic clown Donald O'Connor defiantly stomp around the office of the new diction coach.

Of course, diction (or more directly, voice and sound) play a key role in the film, as our story takes place during the late 1920's, just after the release of Alan Crosland's The Jazz Singer ('27), the first sound film ever made. 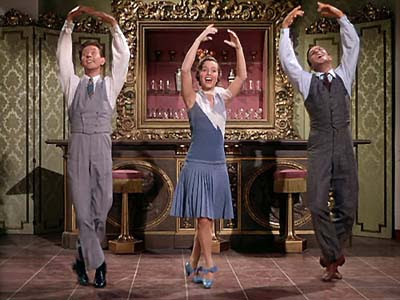 Kelly, playing Don Lockwood, a Fairbanks-like silent star who faces the threat of becoming obsolete due to the high-pitch squeal of his on-screen lover (and off-screen for the press), the platinum blond, Lina Lamont. (Lina is played by Jean Hagen in an Oscar-nominated role absurdly rich in comedic gems.)

When their new picture, "The Dueling Cavalier," makes the switch to sound, the film spares no attempts at laughter in depicting the violent shrill of Ms. Lamont and the upheaval of Hollywood's sudden transition to the "talking era."

As their film quickly takes the form of something worse than a disaster, the rosy-cheeked dancer Kathy Selden (Debbie Reynolds), in between love waltzes with Don on the Hollywood backlot, suggests a musical transformation (which gives us the house-tour joyousness of "Good Morning"). The problem is, Lina can't even talk, much less sing.

The beautiful irony of Singin' in the Rain is that it was released just a year before the implementation of the widescreen CinemaScope process in 1953 in addition to how it eerily resembles the Hollywood we know today as an industry so desperately tied to the trends of the moment. (Just replace The Jazz Singer with Avatar.)

In a film that relies on the plot of a sweet yet undiscovered singer-dancer dishonestly dubbing over the big star's musical harmonies, another touch of irony is the behind-the-scenes reveal that Debbie Reynolds doesn't sing in the film. Among its more immediate qualities and irresistible rhythms, perhaps Singin' in the Rain's greatest achievement is that its sensationalized vision of Hollywood may, in fact, be closer to the reality. [A]
Posted by Chase Kahn at 3:28 PM