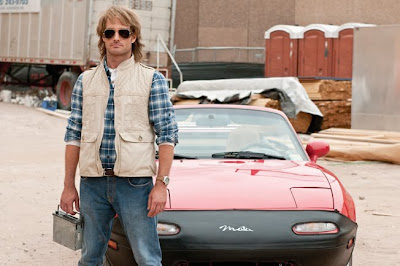 Inflating a pithy Saturday Night Live skit into an 89-minute film (approximately the same runtime as a full-length episode), Jorma Taccone's MacGruber probably contains more laughs per-minute than its increasingly suspect sketch-comedy show, but ultimately it reveals itself to be a one-note cheese grater of an action-comedy in which all the good stuff is in the trailer and (more importantly) all of the really bad stuff isn't.

Parodying the action genre for all its worth, MacGruber is innocuously amusing when it keeps its pants on, but inevitably it devolves into a crass and low-rent parade of recurring sight gags and dubious acts of vapidity. Often, the film mistakes long, awkward conversations for laughs and repetition for playfulness, frequently recycling lines that weren't funny to begin with. (Dieter Von Cunth, we get it!)

And the problem with comedy is that, for me anyways, two good jokes are always canceled out by a bad one. (And unfortunately, the ratio here isn't nearly that friendly.) As the pronunciations of "Cunth" increasingly seem to be omitting the "h", the film too seems to be slipping into a bout of slurring and laziness until it just becomes flat-out unintelligible. This one simply has two celery sticks too many. [D+]
Posted by Chase Kahn at 5:27 PM