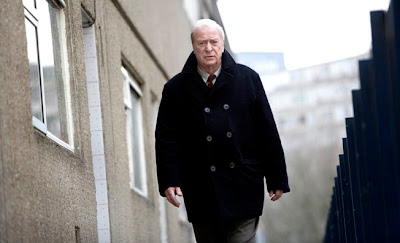 The skinheaded stepchild to Gran Torino, Daniel Barber's Harry Brown is a sickeningly violent retirement home Death Wish, a vigilante thriller encumbered by brooding social issues and repulsive bouts of bloodshed that drown this turd in an air of misplaced catharthis and self-importance.

Attempting to send its legendary star back into the genre that defined his career (the always good Michael Caine), this effort ultimately proves itself unworthy of providing a satisfactory conclusion to the actor who embodied London underworld retribution in Get Carter ('71).

Here, as the titular subject, an aging veteran with a violent past (of course), we watch Harry awake in his apartment as he struggles to get out of bed, glancing dolefully at the vacancy to his left. As he leaves his antiquated yet decorous apartment, the pallid gray walls are revealed to be marred by graffiti and apathy, the streets looming with predators and badmouthed blokes looking for trouble. (At least he doesn't have a lawn for trespassers to disturb.)

When Harry's chess buddy and best friend is brutally murdered (don't worry, you get to see it!) he decides to take justice into his own hands when a well-meaning and savvy policewoman (Emily Mortimer) can't pin anything on the suspected neighborhood thugs in a hilariously rote string of interrogations. ("We dun't no nuffin'!)

Harry's renegade tour through South London's most vicious and abusive gangland may sound like a good time, but in fact, with director Daniel Barber's repulsive meat-hook pulverizings and writer Gary Young's broad incriminations on police inefficiency and youth culture, Harry Brown is a nasty and egregiously portentous genre exercise. [D+]
Posted by Chase Kahn at 9:13 PM