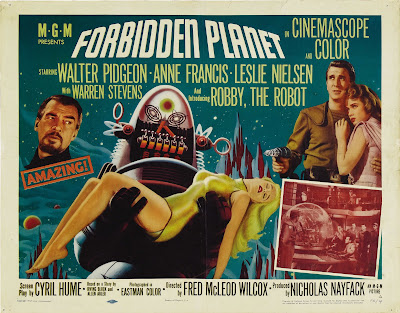 I will certainly buy the 9.7 Blu-ray release of Fred M. Wilcox's Forbidden Planet ('56), a space-travel reworking of William Shakespeare's The Tempest.

It's certainly one of the seminal Hollywood science-fiction productions made during the 50's and indisputably the most glamorous and seductive - the CinemaScope pinwheel colors trying to contain the sexual tension between Leslie Nielsen and Anne Francis at all times.

I love the opening credits (below), with that Louis and Bebe Brown all-electronic score that marks a first not only for film, but for music. Forbidden Planet was the ultimate marriage of mid-20th century science-fiction hysteria and Hollywood spectacle, and the results are goofily wonderful.