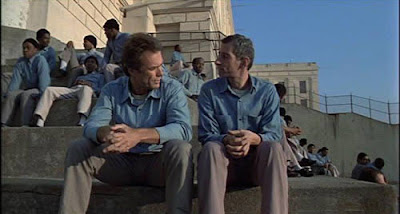 Don Siegel's Escape From Alcatraz (1979), based on the only possibly successful escape from the notorious Alcatraz Island, is a no-frills prison escape-suspense drama that sustains an effortless interest level and a quiet, business-like mood with an emphasis on sound design that reminded me of the opening credits to Sam Peckinpah's The Getaway (1972).

Of course, it's also mainly a Clint Eastwood thing - that being a prime excuse to play off of the snarl and the smart-ass frankness of a tough-minded and compassionate man of few words. (The filmmakers don't even mention why his character, Frank Morris - the real-life mastermind behind the escape - is even in prison.)

And certainly no attempt is spared in regards to vilifying the prison guards and the warden (Patrick McGoohan), nor towards creating audience sympathy towards the inmates. In direct contrast to a film like Robert Bresson's A Man Escaped, which is consciously minimalist, claustrophobic and psychological, Escape From Alcatraz is more procedural laced with suspense scenes and a Jerry Fielding musical accompaniment that sounds like it takes its cues from the less recognizable motifs of John Carpenter's Halloween (1978).

I love that final shot of the hideous plaster-molded head that both Eastwood and the real Frank Morris propped in their beds to delude the guards while they made their escape into the San Francisco Bay. And while the ending eschews from the real-life ambiguity of the escape and our escapees dramatized into likeable anti-heroes, the thrill and the conception of the getaway is unavoidably compelling. [B+]
Posted by Chase Kahn at 8:53 PM