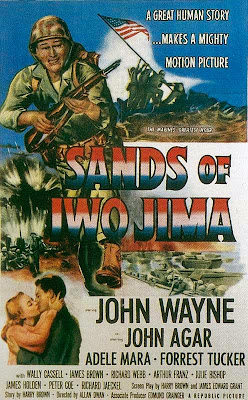 Throughout the 1940's, America's favorite action hero John Wayne starred in a slew of predictably propagandist WWII films, most notably John Ford's They Were Expendable ('45), Edward Dmytryk's Back to Bataan ('45) and lastly, Allan Dwan's Sands of Iwo Jima ('49).

In contrast to the selfless Colonel who stays behind to train a group of Filipino resistance fighters against the Japanese in Back to Bataan ('45), Wayne's Sgt. Stryker in Sands of Iwo Jima is a much rougher and intermittently antagonistic character - a testy, curt and heavy-drinking squad leader whose demand for perfection leads to mild unrest among the troops.

Beginning with the invasion of Tarawa and ending with the infamous flag-raising on Mt. Suribachi in the titular battle, the film is at it's best when the bullets aren't flying. When focusing on the father-son dynamic of the unrelated Sgt. Stryker (Wayne) and the young newlywed Private Conway (John Agar), Sands of Iwo Jima flickers with vitality - the kind that coursed through Wayne and a young Mongtomery Clift in Howards Hawks' Red River ('48). 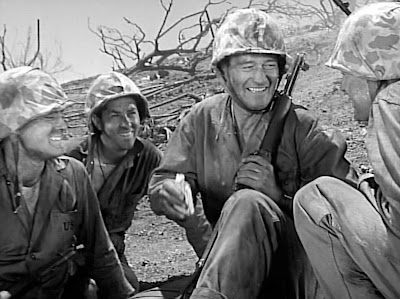 Though to the film's detriment, it never quite takes that plunge, settling in as a slight war effort that doesn't even skirt the isolation and squad dynamics of say, William Wellman's Battleground ('49). Instead, it settles for easy stock footage and nebulous geography on the battlefield that lacks the verisimilitude of its genre brethren. [B-]
Posted by Chase Kahn at 8:00 PM