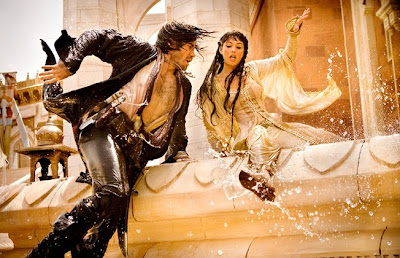 Mike Newell's Prince of Persia: The Sands of Time is a gravity-defying, time-traveling sandstorm of an action-adventure. It's heavy on plot, rooftop dives, ancient trinkets and goofy banter - partly resembling the sandy, ritualistic escapism of Stephen Sommers' The Mummy , but mostly it recalls the stale formulism and delivery of the recent Clash of the Titans remake.

Among its more admirable feats is the way that it crams a heavy dose of mythical wizardry and Persian power struggles into a mostly coherent story - if a bit chubby - that clocks in at just under two hours. (If only the Pirates of the Caribbean sequels could have be so pointed.)

On top of which, Prince of Persia is a video-game adaptation that, as silly and conservative as it is, actually evokes the gameplay mechanics of its source while still functioning as an entirely separate entity. If it isn't the best video-game adaptation to date (a distinction that's hardly brimming with contenders), it's certainly one of the most faithful and fashionable.

Attempting to break into the realm of the action star, Jake Gylenhaal proves, if nothing else, that he's a touch more interesting than Sam Worthington. He certainly passes the visual eye test, his balletic free-running contrivances looking effortless while his British accent fades from focus, seemingly becoming potent enough to eschew scrutiny. (Although why it's necessary is another matter.)

It's the silky, radiant Gemma Arterton and the wrapped-up and oafish Alfred Molina that bake away in the desert sun - the former attempting to make up for wit with appearance while the latter (an "entrepreneur" who races ostriches and seeks gold) brings us to the James Kincaid quote which asks, "Who is relieved by comic relief?"

And unfortunately, relief for this unusually flaccid summer season has not yet arrived, for Prince of Persia simply isn't up to it. As harmless and modest as it is, like its heroes, it doesn't feel too concerned about the task at hand, it can always just press a button and try again. [C+]
Posted by Chase Kahn at 1:17 PM