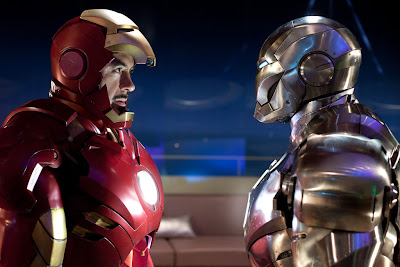 With more guitar-riffing, industrial machinery and techno-affluence, John Favreau's Iron Man 2 ushers in the follow-up to 2008's surprise summer hit. Not quite suffering from the drastic side effects of sequel-itis, the film nevertheless ails from its own progression, fumbling with the inability to balance the franchise's signature wit with armor-enabled flight - sadly, it sputters.

Dive-bombing from Russia to Malibu to Monaco, the first half resembles the turmoil surrounding Tony Stark (Robert Downey Jr.) himself - utter chaos. Under pressure from the Federal Government to relinquish the power of the suit and concurrently in competition with a slimy weapons-tech competitor named Justin Hammer (Sam Rockwell), eventually S.H.I.E.L.D. director Nick Fury (Samuel L. Jackson) steps in to intervene and offer his guidance. (Plus a few obvious winks directed at the impending Avengers assembly.)

Then things take a turn for the worst when a disgruntled Russian physician named Ivan Vanko (Mickey Rourke) roughs up Mr. Stark at the Monaco Grand Prix in one of the film's many examples of its love for the preposterous.

As it turns out, Mr. Vanko is the son of a spurned former partner to Howard Stark, and thus is back attempting to slay the offspring of his family nemesis using the tech that they created together. And, oh yeah, Tony is slowly dying because of the toxic levels exuding from the palladium in his central arc reactor - yikes, tough times.

Eventually Tony's frustration (and our disenchantment) boils over into a strange, drunken birthday party at the Stark mansion with an appearance from the late DJ AM of all people. Confronted by Col. Rhodes (this time it's Don Cheadle), who is outfitted in one of Stark's spare flight suits, the two duke it out to the familiar bass line of Queen's "Another One Bites the Dust." Trust me, it's as off-putting as it sounds.

From here things finally turn into gear and the pieces of Justin Theroux's diffused script finally begin to fall into place enough to deliver a touching moment between Tony and his father (John Slattery) before toping things off with one helluva action climax. (Even though Mr. Rourke's Ivan Vanko/Whiplash means the series is now 0-for-2 on compelling villains.)

In the end, Iron Man 2 essentially delivers what it promises, but the road is a bit nebulous and off-kilter. The cool charisma of the first film is now essentially zapped from view and as AC/DC's "Highway to Hell" takes us out, we leave with a faint smile and a shrug. [C+]
Posted by Chase Kahn at 3:05 PM