The esteemed general of la nouvelle vague, Jean-Luc Godard made a slew of the most discussed and debated films of the 60's, spearheading an iconoclastic cinema movement that sent shockwaves throughout Europe and made a profound impact on the crowded international filmmaking scene.
In what is perhaps the most definable and atypical of his earliest (and greatest) works, Vivre sa vie, the story of an aspiring actress who falls into a life of prostitution, could also be his most reverent - as a tearful trip to the cinema to see Carl Dreyer's La Passion de Jeanne d'Arc would indicate.

It's still very much a Godard film however, as his twelve-part novelistic storytelling structure and experimental camerawork makes evident, including some unique, backside bar-stool conversations between Nana (Anna Karina) and the many men whom she engage in businesslike chit-chat. 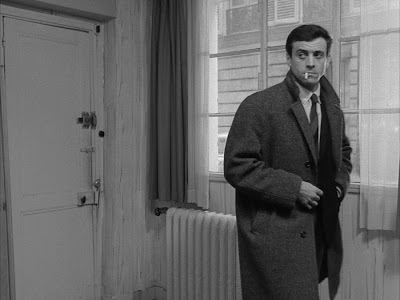 Nevertheless, Vivre sa vie feels as minimal and as Bressonian as anything Godard has ever done. The jump-cuts, the esoteric cameos, references and endless philosophizing are there (as is Raoul Cotard's stunning black-and-white cinematography), but it appears that the French auteur is coming from a more sympathetic place this time around in depicting the tragic existence of his alienated subject and doing it with a studious, existential eye.

But the question of whether or not Nana is responsible for her imminent outcome, as she states, or if she is simply a victim of cruel fate (free will vs. fatalism) is a bit nebulous, complicated by her endless philosophy discussions over the final few "tableaux," including a rough table-chat with the real-life philosopher Brice Parain in which Godard threatens to garble the proceedings.
On the other hand, a reading of Edgar Allan Poe's "The Oval Portrait" (in Godard's own voice, no less) provides an apt discussion of art imitating - and in fact surpassing - life itself. Substituting the woman in Poe's short story for Nana (and thus Karina, Godard's then-wife), the allusion to the couple's inevitable demise five years and four films later, becomes sufficiently clearer. [B+]
Posted by Chase Kahn at 7:56 PM