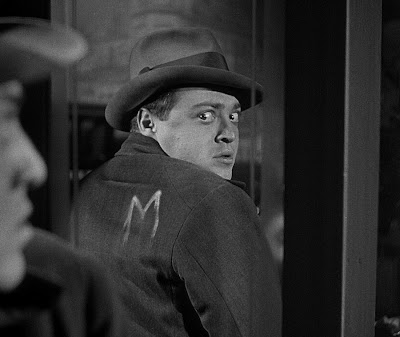 It's too late in the night to riffle through all of the ins and outs of Fritz Lang's M ('31), which I watched for the first time tonight (I know, sue me), but my initial reaction after just finishing it was that it's a stunning procedural chase film-cum-social drama that hits home in the same way as Akira Kurosawa's High and Low ('63).

Fused with a masterful technical fluency - the reliance on sound for continuity, the whirling, beautifully composed camera movements and high-angle expressionistic compositions - M certainly has to register as the finest and earliest example of what could be accomplished artistically with sound. The fact that it was Fritz Lang's first foray just adds to the mystique and to the craft.

Written by Lang and his wife Thea von Harbou, the film chronicles the pursuit of child serial killer (Peter Lorre) through Berlin and the social unrest and anxiety of such a chase. (It is a rare bird in that both policemen and criminals find themselves sharing a common enemy.)

I love how Lorre's character can't stop humming "In the Hall of the Mountain King," which is the root of every killer-song association in the history of cinema. (The Night of the Hunter clearly owes a lot to M.) And I also love how, for a film made in the 1930's, it delves into the psyche of a murderer in the final scenes, even going so far as to create sympathy.

The second-to-last line, which is spoken just before the judge can make his ruling ("This won't bring back our children") is deliciously cynical, as we, the audience, are denied even the knowledge of our psychopathic subject's fate. [A]
Posted by Chase Kahn at 10:42 PM