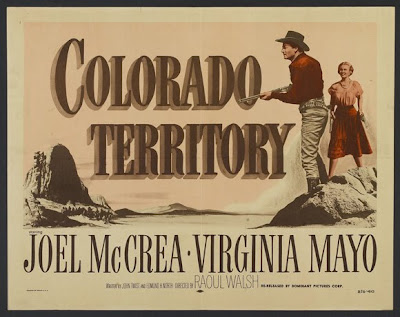 A rare breed of redemptive film noir transplanted from the bustling cityscapes to the old West, any resemblance to the crime films of the 30's and early 40's would be justified, seeing as how Raoul Walsh's Colorado Territory ('49), is in fact a remake of his own High Sierra ('41).

Known as and widely regarded for the star-making performance of Humphrey Bogart, High Sierra is very much the same film as Colorado Territory. Both deal with a run-down outlaw tired of a criminal life and looking to settle down as one final - and inevitably fatal - holdup stands in their way.

Joel McCrea plays Wes McQueen, the bandit in question who is busted out of prison by his longtime boss. Weighed by loyalty, he's pushed into one last job with a couple of goons and their feisty, glamorous half-Indian counterpart, Colorado (Virginia Mayo, in the Ida Lupino role).

But McQueen has his sights on a lonely farm girl, Julie Ann (Dorothy Malone), who resembles his deceased wife and gains her admirer's sympathy in the same way that Joan Leslie and her deformed foot softened Mr. Bogart.

The point in both films that has twice struck me as a bit clumsy is our criminal-on-the-loose and his hovering admiration shifting from the wholesome, gentle object of desire to the tougher, similarly trapped broad who will follow him up into the mountains to his death.

Perhaps its meant as an illustrative example that money and well-standing can't buy the life you want and that a criminal is a criminal, but I will say that the revelation is much smoother here than in High Sierra. At least Colorado Territory spares us the shame of placing the fate of our hardened gunman in the bark of dog named Farb. [B+]
Posted by Chase Kahn at 12:13 PM