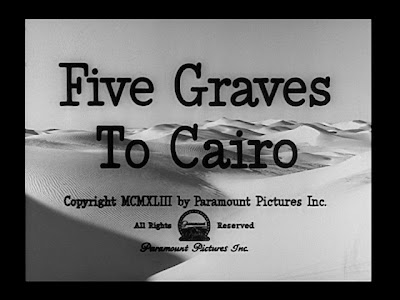 When discussing Billy Wilder's WWII drama Five Graves to Cairo ('43), no one seems to be able to shut-up or run out of humbling adjectives for the famed Hollywood icon Erich von Stroheim's performance as Gen. Rommel.

Unfortunately - and apparently unknowingly to these certain reviewers - the film is a lot more than a showcase for Mr. Stroheim. Set in the Egyptian desert, Five Graves to Cairo is the same kind of war drama about prevailing patriotism in the face of self-preservation that runs through films like Casablanca ('42) or Passage to Marseilles ('44).

But rest assured, for the film doesn't drown in syrupy diatribes of honor and duty too often - instead, with the delicate touch of Hollywood auteur Billy Wilder (in just his second feature film), Five Graves to Cairo is a fun, wryly comedic sand-swept adventure film with enough Nazi mysteries to pass off as an early incarnation of the Indiana Jones series. 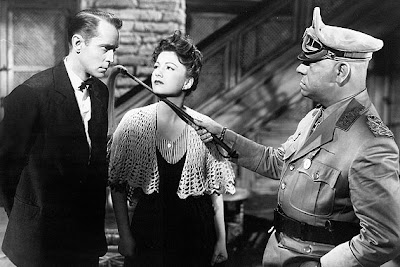 Our hero, a British tank soldier named John Bramble (Franchot Tone), is forced to assume the identity of a deceased hotel worker when the German high command enters the small desert village of Sidi Halfaya. Among the other non-Germans at the nearly deserted place of accommodation are a French maid named Mouche (Anne Baxter) and a loopy, comic-relief manager named Farid (Akim Tamiroff).

When Mouche (Baxter) convinces a young German officer to help her free her brother from a prisoner of war camp, threatening to jeopardize Bramble's (Tone) highly resourceful intel, the British soldier gives her an apt lesson in loyalty and selflessness.

It takes a bit of a nose dive in the final moments, but Five Graves to Cairo is nevertheless the kind of propagandist wartime adventure that's lean, fluent and irresistible. [A-]
Posted by Chase Kahn at 7:21 PM