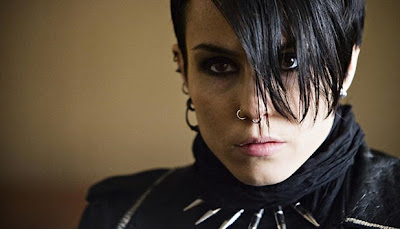 Ugly and mean-spirited, this Swedish-language adaptation of Steig Larsson's worldwide bestseller counters its brutal sadism with a dose of its own medicine. Titled Man som hatar kvinnor ("Men Who Hate Women") in its native language, Tattoo is too unremarkable as a horror-mystery and too oppressive as a feminist revenge-fantasy.

Essentially an icy Swedish backwoods whodunit, this 152-minute thriller has enough sexual abusers and Nazi dungeon-dwellers to please a genre fan who gets off on the torture-porn of the more recently broad variety.
When it isn't testing its audiences tolerance, it's holding our face up to a computer screen or a stack of paperwork, apparently attempting to get us to play along with the Vanger family mystery of a beautiful young girl who went missing 40 years ago. For most of the time, the film seems to consist of people just staring at pictures set to loud, overbearing music.
And it's unfortunate, yet painfully clear, that director Neils Arden Oplev has no keen sense for pulling any kind of meaning or substance out his frames. (The catharsis of our heroine purging the world of woman-abusers needs the touch of a filmmaker who knows how to handle the confused emotions more clearly than through a barrage of flashbacks.)
This obviously isn't the case, and thus is The Girl with the Dragon Tattoo's fatal flaw. Oplev is just along for the ride, his job simply to construct Larsson's 600-page novel into a reasonably coherent big-screen illustration. [C-]
Posted by Chase Kahn at 11:22 PM