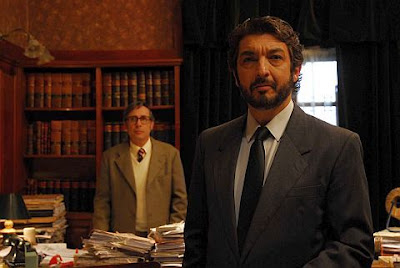 It's certainly disconcerting that, when pitted against Michael Haneke's The White Ribbon and Jacques Audiard's A Prophet, this well-acted piffle from Argentina emerged as the 2009 Oscar winner for Best Foreign Language Film.

It's respectable in certain areas, but Juan Jose Campanella's decades-spanning drama about a tragic murder case and the effect it has on the people involved - chiefly a non-committal federal justice agent (Ricardo Darin) called to the scene - is a phonily momentous mystery-thriller.

Told in an expansive series of flashbacks before playing out in the present, The Secret in Their Eyes does a fine job of keeping a grip on its characters, while allowing any semblance of logic to slip right through its fingers.

The chase-for-the-killer diversion takes up a good portion of the first part of the film, and while allowing the audience the ability to dive right in to these characters (including a wonderful Soledad Villamil), it plays out about as conveniently and authentically as an hour-long primetime CBS procedural.

Even looking past a contrived lead involving an old photograph, the film takes a turn for the worse with a loopy one-shot take through a filled-to-capacity soccer stadium. Sure, it showcases remarkable camerawork, but it serves no logical purpose other than perhaps to conceal the severely questionable believability of two makeshift detective spotting their suspect (whom they've only seen in photgraphs) amongst a sea of thousands.

While themes of unfulfillment and a delicate little romance lead to a haunting portion of the finale, a big zinger of a twist, endlessly shrouded in flashbacks, further illustrates the film's lack of pointedness and its propensity for artificiality. [C]