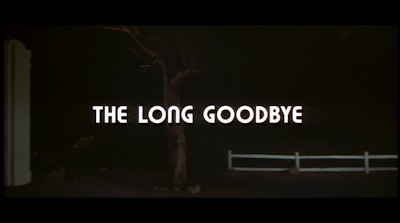 Robert Altman's The Long Goodbye ('73) is a strange, mumbling, almost listless neo-noir, and I absolutely mean that in a good way. It's more of a celebration or a wink-wink acknowledgment of that Humphrey Bogart/Raymond Chandler 1940's private-eye style, stirred and whipped to a low-key frenzy.

It takes place in present day Southern California, but with the jazz band music playing on car radios and home appliances, it's very clear at times that Altman is going for some kind of alternate reality, a confluence of 40's starlight Hollywood and 70's soft-focus Malibu.

It's all the more disorienting with screenwriter Leigh Brackett's layered, almost Hawksian screwball dialogue, which frequently evades the matters at hand in an effort to drive home the film's meandering, noirish overtones. 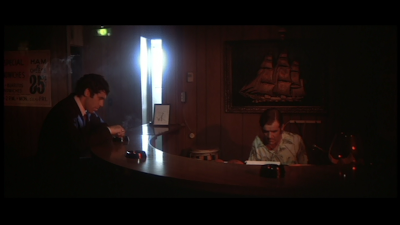 Elliot Gould, putting on his best Bogart face in a remarkable performance, takes out and fires up a cigarette so often it can't be anything but a sarcastic nod from Altman - that or this Phillip Marlowe has discovered the fastest-burning cigs of all-time.

Of course, the film is an adaptation of acclaimed private-eye novelist Raymond Chandler's "The Long Goodbye," which stars the same recurring hero played on screen by Humphrey Bogart in The Big Sleep ('46) and Robert Mitchum in Farewell My Lovely ('75), among others.

Brackett reportedly took great liberties with the source novel (for one, a thirty-year leap through time), and the convolution is pumped up with the introduction of a third-party gangster (Mark Rydell) and his band of droogs, but such is the way with these animals, and The Long Goodbye is a grand homage that works on its own right, just remember your cigarettes and your cat food. [A-]
Posted by Chase Kahn at 3:14 PM