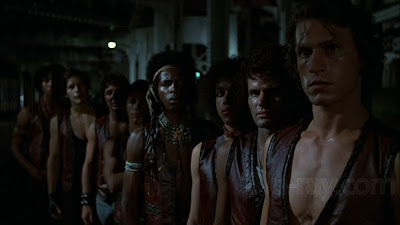 I really dig Walter Hill's The Warriors ('79), a low-budget cult film about teenage gang culture, but recently I watched the director's cut Blu-ray and found the alterations frankly appalling.

There's no new footage, per se, in this new cut, but rather comic-book styled transitions between scenes including an introduction juxtaposing the quest of the titular gang and their treacherous journey to Coney Island to a legend involving a disbanded group of Greek soldiers stranded in the depths of the Persian Empire.
Walter Hill even admits up front in a pre-show introduction that he dislikes when filmmakers revisit and alter their past works, even going so far as to say that a lot of people won't like his changes, yet he does it anyway.
The result is off-putting and disruptively razor-sharp. These comic-book, strip-panel stylings feel like the storyboard transitions used in Infamous - for any Playstation 3 fans out there.
-
It's simply a bastardization of the mood and the tough-and-grainy 80's atmosphere, but more than anything, it brings nothing to the table in terms of enhancing the narrative of the film and thus is a grossly superfluous addition.
The Warriors is still a breezy, stylized street-brawler that holds up every time you watch it. It was clear to me this time out that Hill was channeling A Clockwork Orange and Sam Peckinpah in the way that he cuts and orchestrates his brutally composed beat-downs.
Posted by Chase Kahn at 12:37 PM