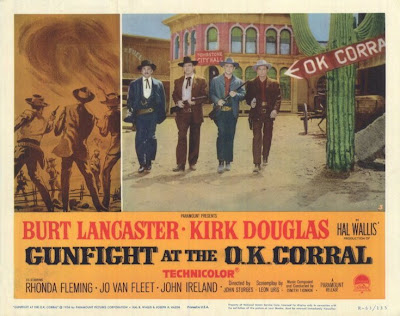 For a five-year stretch in the mid-20th century, John Sturges churned out one of the most impressive streaks of quality production in the western genre, establishing himself as a master of the widescreen form and a wily action filmmaker.

Although Gunfight at the O.K. Corral ('57), another retelling of the famous shootout at Tombstone with Wyatt Earp and company, may not have the wonderful small-town hysteria of Bad Day at Black Rock ('55) or the star-power of The Magnificent Seven ('60), I believe it's his most purely entertaining western and certainly the most lusciously photographed.

It's not exactly a film to be dissected or examined the way that a John Ford, Sam Peckinpah or Anthony Mann western could, but for what it is - a handsomely-mounted take on the legend of an unlikely friendship - it's a frequently gripping piece of entertainment.

Throwing his hat into the ring alongside Henry Fonda, Randolph Scott and Joel McCrea as actors who have had the chance to portray Wyatt Earp on screen, Burt Lancaster is solidly stoic in the lead role, although naturally it comes up short when viewed against his greedy, grinning lone gunslinger in Robert Aldrich's Vera Cruz ('54), playing opposite Gary Cooper.

Here Kirk Douglas, who would team up with Sturges again in Last Train From Gun Hill ('59), has the meaty role as Doc Holliday, the gambling goon with a bad cough and a reputation for trouble who gets tangled with Wyatt in his stand against the Canton gang.

It's the classic story of a selfish outlaw finding purpose through an improbable relationship given a twist in that it's not driven by love but by friendship. (His gal, played by Jo Van Fleet is comparatively tossed around.)

Of course, we also have fun, minor turns by Lee Van Cleef, Jack Elam and the late Dennis Hopper, but a romantic interlude with the lovely Rhonda Fleming frankly comes up short, just prolonging the inevitable dust-up, which absolutely delivers. [A-]
Posted by Chase Kahn at 3:11 PM